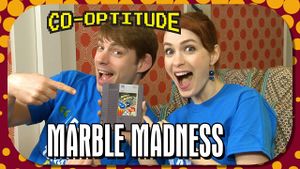 Ryon: "This is my sister, Felicia,"

Felicia: "this is my brother, Ryon,"

Ryon: "and we're gonna bleep out all the swear words because the YouTube contract requires us to do so."

Felicia: "I have a huge collection of marbles. If you're lucky, I—"

Ryon, pointing to Felicia's head: "They're not up here though, eh? Eh?"

Felicia, looking disgusted: "What the fuck!?"

Ryon, to someone off-camera: "Can you insert a laugh track for this? Alright, good."

Ryon: "Okay, there would be no point to going down there— [Felicia resets console] oh— YOU FUCKING SHIT!!"

Ryon: "Are we actually getting to the point where we're reading instruction manuals?"

Felicia: "I don't like where this is going either, but—"

Felicia: "Can we play Diablo?"

Felicia: "I didn't say anything the whole time, and therefore I did better. I think when I move my mouth, my hand-to-eye—"

Ryon: "So let's just have the audience watch us play games in silence."

Felicia: "Oh god, you got dizzy for no reason. You're like hypoglycemic."

Felicia: "What do marbles eat for breakfast?"

Ryon: "Is this a joke? What do they eat for breakfast?"

Felicia: "If it was on a popsicle stick. What do marbles eat for breakfast?"

Felicia: "Did you hear that? A well rounded meal."

Felicia: "My face, I'm sure, looks like I'm taking a shit when I'm playing this game. [makes a face while grunting]"

Ryon: "Did we ever finish this? The Amiga version of this?"

Felicia: "I don't remember. I think I lied to Gerhart and said that I totally finished it. No, we never did."

Felicia: "Your arrogance is gonna be your downfall."

Ryon: "Okay, here we go. All I have to do is believe in myself, and be good."

Felicia: "This is your moment to shine."

Ryon, as hammers knock him off the edge: "HAMMERS! Stop fucking with me, hammers!"

Felicia hums U Can't Touch This by MC Hammer

Felicia: "I have to tell you, you deserved that. I believed in you. Alright—"

Felicia, while Ryon mistypes the name Anuss: "'AMOOS'? Rub it out. [spit takes] I didn't mean that! Fuck you. Who would put 'rub' there? In the history of video games, have you ever seen—"

Ryon: "Look, Milton Bradley was new at this, okay?"

Felicia: "This is frustrating, but I mean I'm having a good time failing, which is all about what video games should be."

Ryon: "God dammit! You're just bumbling into first place. You realize that, right?"

Ryon: "HOW THE FUCK DID YOU GET THERE!? I am so angry at you right now, I can't even tell you how angry I am. Get off. [pushes Felicia's ball off edge] Get off."

Gerhart: "Muwahaha. 'Marble champion,' huh? I told you you couldn't beat this game."

Felicia: "Toucan Sam wants to fuck you over."

Felicia: "Alright, you could do this."

Ryon: "I have no desire to continue."