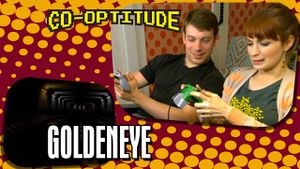 Ryon: "Hi! Welcome to Co-Optitude, the segment with the fucking—"

Felicia: "I wish it was Remington Steele: The Game."

Felicia, as Bond appears in game intro: "Look at him, he's hot."

Ryon: "He's so hot, all five pixels of his face. That's because there's not enough resolution to show all the wrinkles."

Felicia: "Shut up. Shut up! He's really hot. You're ridiculous."

Felicia, as low-polygon woman appears on screen: "Whoa! Look at those breasts! Oh my god, it's so pointy you could open an envelope."

Felicia, as another low-polygon figure appears on screen: "It looks like somebody inflated a condom and drew a face on it."

Felicia, as she fumbles with the controls: "I know people are screaming at me right now. Just fuck off."

Felicia: "My hands are not big enough for this [controller]."

Ryon: "You have to have the hands of a pianist. 'Do you have an eight-octave span? Then you can play fucking Golden Eye.'"

Ryon, as Bond looks at his watch: "'Is it time for my Metamucil yet?'"

Felicia: "Alright, Pierce. I'm in your brain. Let's do this."