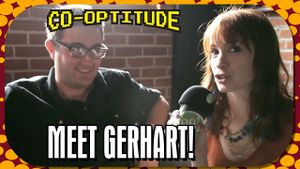 In the Goldeneye episode, Felicia and Ryon remark on how the cartridge has the name "Gerhart" written on it in Sharpie. His name comes up frequently throughout the episode, wondering how he did so well in this game that they are struggling with, and at the end they ask for the real Gerhart to make himself known in the comments, and Felicia offers to buy him pancakes.

The real Gerhart was found, and Felicia did this short bonus content video at the Geek & Sundry lounge at Jolt'n Joe's in San Diego during Comic Con. She interviews Gerhart about himself and the game. Gerhart gives Felicia a gift, a NES cartridge of Marble Madness, which is played in a later episode. The video ends with a gag of Felicia making good on her promise of pancakes by dropping a plateful loose into a tote bag and pouring syrup into it and handing it to him as she rushes off to another event.

Felicia: "What were your impressions of how we played the game? Were they similar to your middle school glory? A similar level of effort?"

Felicia: "Got his own rating system. That's interesting."