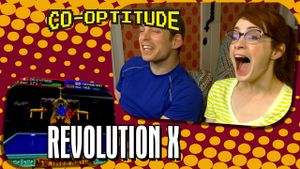 Felicia: "Have you ever taken speech cl— sp— speech lessons?"

Felicia: "What, are we his valet now? 'I know you killed about four-hundred civilians, I need you to do something else.'"

Ryon: "Alright, you wanna shoot the missiles and I'll get the chopper?"

Felicia: "No, let's not plan anything."

Ryon: "Kill the engine! Kill the pilots! Kill everybody!"

Felicia: "Steven Tyler needs his car!! He needs to make babies who are beautiful and we wanna look at!"

Ryon, while shooting at helicopter: "Aerosmith said they'd listen to our demoooo taaaape!"

Ryon: "With the gigantic lips. [impersonating eating] Mmumm-mmumm. I like me pudding. Is he British?"

Ryon: "We have to drive the Lamborghini to the Amazon jungle. From LA."

Felicia: "So we're killing all the natives because Steven Tyler's bandmate thinks there's like some chemicals in the food?"

Felicia: "Question: Is there a band that you would actually create a revolution for? I kinda like Tegan and Sara."

Felicia: "You didn't pick a band. Would it be, oh, Mumford and Sons?"

Ryon: "My friends — I gotta give a shout out — my friends said they were gonna open a food truck called Mumford and Buns."

Felicia: "And the mascot is just a bun and a beard. Oh god. Tegan and Soft Serve!"

Felicia: "Right here. This is Stevia. No, Stevia's natural. Stevia."

Ryon: "Boy, you're rather witty today. This is good."

Felicia: "Steven Tyler wants to replace the world with Stevia. He invented it. It's his sweetener."