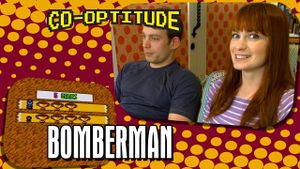 Ryon, as comet appears on screen: "Alright, what do we got here? Wow, a Q-Tip!"

Ryon: "A Q-Tip or a sperm. You should be proud of me. I was gonna say big dick but then I said Q-Tip instead."

Felicia: "You know, it's fascinating how the mechanics of the physical—"

Ryon, not paying any attention: "Alright, I wanna be— whoa!"

Felicia, seeing the players labeled "MAN" on screen: "Man. Why are they all men? What the fuck is this? I don't wanna play a man; I wanna play a woman. Why can't I be a woman in there?"

Felicia, to herself: "Thaaat's why you're single."

Felicia: "Whoa, I just shit out two bombs. I keep shitting out bombs! Oh my god! Stop! Why was I shitting bombs out like that!? Look at it! I'm not touching anything, and bombs keep coming out of my asshole! No, this is not right. No, seriously, dude. I just keep dropping bombs out of my ass like I'm a fucking rabbit."

Felicia: "So I need to go around the corner when I drop a bomb."

Felicia, after several rounds of play and a long pause: "Oh, okay, I get it, we're competing against each other."

Felicia: "OH! Fuck you, Felicia! Felicia, you're an idiot! [to Ryon] You have no skill! I'm just literally killing myself."

Ryon: "I just have to be a little less incompetent than you and I win every time."

Ryon: "You almost didn't kill yourself? Are you boasting about this right now?"

Felicia: "Dude, it's an improvement."

Felicia: "This is literally the best game I've played in years."

Ryon: "This is pretty much awesome."

Felicia: "Why don't they have this now?"

Ryon: "'Cause you'd have to like do a microtransaction for every power. Do you want additional bombs? One cent. One cent per bomb."

Felicia: "I just spit all over."

Ryon: "I think that's probably the best rating any video game creator could possibly want. 'High speed is great, you can go all fucking pfffffffft!'"

Felicia and Ryon together, reacting to results screen: "'Draw game'!?"

Felicia: "Nobody's in the audience. They're like, 'That was the shittiest performance ever.'"

Felicia: "All they want is somebody to lose."

Felicia: "The irony is that the person who won is the worst player."

Ryon: "I am well aware of that. You've told me many times."

Felicia: "The number one game we've played the whole time, even though I wasn't particularly talented, competent, or victorious, ever, I would say the enjoyment of blowing myself up repeatedly and basically handing him victory after victory, with no skill on his part whatsoever—"

Ryon: "Incredibly satisfying on my part, too."