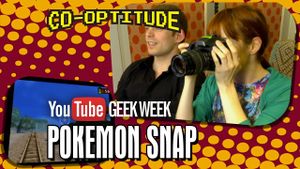 This was the first of several episodes featuring a Pokémon game. It also is the first episode to feature the character name "Anuss".

Felicia, reading: "I'll teach you how to take pictures in the first course."

Ryon: "No, just— syllabus. Just give us the syllabus and let us go."

Felicia, annoyed at the game: "I don't know, man, just keep going. This—"

Ryon: "Look, you might not care about your academic career at Pokémon University, but as for me, I know if I'm gonna get a job with this degree I better have a fucking 4.0."

Felicia: "You are so into this."

Felicia: "You are so into this!"

Ryon, acting taken aback: "Professor Oak! Are you offering me a better grade?"

Felicia: "You are ruining so many peoples' childhood memories right now."

Ryon, reading: "'I saw the pictures taken by ANUSS.'"

Felicia: "Is this literally the game, we take pictures!?"

Felicia: "I don't wanna look at the report!"

Ryon: "Come on! Look, if this is gonna be our career, we have to fucking publish or perish!"

Felicia, reading: "'It disappoints Pokémon to be photographed from behind.'"

Ryon: "I think that depends on the Pokémon."

Ryon: "You saw a murder! That's gonna get double marks! This is where the game takes a dark turn."

Felicia, watching Diglett: "Oh! That's not suggestive. It looks like a corndog going through a corn hole."

Felicia, reading: "'Would you like to be closer with Pokémon?'"

Ryon, uneasily: "Uhh, what kind of photos do you want me to take?"

Ryon, as Jack: "'Wow, I just killed something. That was cool.' And Jack was never the same after that. After his first taste of murder."