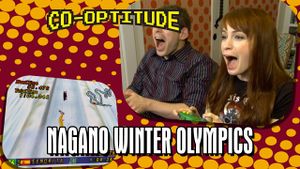 Ryon: "Or you can do figure skating while I take a nap, maybe."

Felicia: "Figure skating is artistry and athleticism at the same time. Get your shit together."

Felicia: "I want a catchphrase now."

Felicia: "So you're hired to make a game for the Olympics—"

Ryon: "You let your six-year-old son draw the fucking characters."

Felicia: "Let's do a basic speed skating. Let's spend twenty minutes deciding what sport to do rather than just try them out."

Ryon, with Netherlands selected: "Aren't you too busy eating chocolate?"

Felicia: "That's the worst country insult I've ever heard in my life."

Ryon: "Eh, I was just giving him a head start."

Felicia: "If you were an army invading either Sonic world or Mario land, this would be the outfit."

Felicia: "Oh god, look at your devastation. Look at the devastation. Oh my god. Just slit your throat with your skate right now."

Felicia: "You disappointed a country. Don't come back."

Ryon: "I gotta figure that out, like, there's two buttons. There's two things to do and we're doing them wrong. You understand that, right?"

Felicia: "Not surprising to the audience.

Ryon: "So quickly we forget."

Ryon: "His life's gonna be really short after he breaks his fucking neck."

Ryon: "It's like he's been skinned by the Boltons or something like that. 'Where are my dragons?'"

Ryon: "I had to be made of steak, apparently."

Felicia: "Your mother sacrificed so much to get here, and in the middle of your jump you're like, 'Fuck it.'"

Ryon: "This simulates what it's like to put years of hard effort into perfecting a sport."

Ryon, as luger is scooting to start: "Whoa, it's like a dog does on the carpet, did you see that? Merca's butt was itchy."

Ryon, as Felicia's luger tumbles up the side of the track: "Do a barrel roll!"

Felicia: "You're a fucking liar."

Ryon: "This is the last turn."

Felicia: "Shut the fuck up."

Ryon: "This is the most basic possible snowboarding tricks ever."

Felicia: "Because you pick the same fucking trick every single time."

Felicia: "Who let him in the Olympics?"

Felicia: "That dairy swirl was not—"