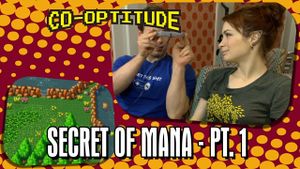 This is part one of a two-part play-through of Secret of Mana. The second part is Episode 13.

Ryon: "It's that time of the week again!"

Felicia: "I thought you were gonna say 'that time of the month.'"

Felicia: "Well, the latest Tomb Raider was made by the— the— prog— whatever, the descendants of the guys who did these. Probably the same dudes. It's only twenty years."

Ryon: "Probably the same dudes. They're not their own descendants."

Ryon: "Game developers only live five years, then they go to a spawning ground and die, and their offspring take over the game development."

Ryon: "I'm just hopping up and down on one foot. Oh wow, I'm a fuck up. God. [player falls off log] And the game ends! I fall to my death! That's it! Credits roll! It's a cautionary tale."

Felicia, reading: "'The village is this way. I have to find something to cut through!'"

Ryon, with sword very prominently on screen: "Do you see anything sharp that I could possibly use to get through these weeds?"

Ryon: "I mean, if he can't move a lily pad out of the way, there's no way he's gonna get through grass."

Ryon, circling a sword: "I wonder, if there was just something sharp around here. Do you see anything?"

Felicia: "Okay, can you please say your dialog?"

Ryon, projecting loudly: "'IT IS I who asked! The sword.'"

Ryon: "Oh god, what is this flying scrotum? A 'rabite'. Not quite a rabbit."

Felicia: "No, it's a rabite. It's like a cross between a rabbi and a rabbit."

Felicia: "God, it's so satisfying for you to mow down these plants."

Ryon: "It is! There's not a single vegetation that's going to survive my tenure here. Kill all plants."

Felicia: "I know, but how do they have sex? They just bounce at each other? Because there's just nothing to grasp each other with."

Ryon: "That's usually how I have sex."

Ryon, after killing a small enemy and a huge chest appearing: "Oh, what, wow. That chest is bigger than he was! He was like, 'Please kill me and release me!'"

Felicia: "God, I love games where you can level. It's like, it's fair. In life, you should be able to level. You should get a certificate, like after college it should be like, college diploma, level 12."

Ryon: "You should be able to get attribute points to spend."

Felicia: "I think you should, too. Grade one—"

Ryon: "And you should have put more into your intelligence over the years, clearly."

Felicia, reading: "'RYON! The Elder was looking for you. What did you do this time?'"

Ryon: "Ohhh, obviously I'm a fuck up. 'What did you do this time, loser? You're even dumber than the kid with the dunce cap on.'"

Felicia, reading, doing a voice: "'There's a strange guy in here. He looks kinda scary.' That's the same voice as the other one. I think we've met my match."

Ryon, pointing to dialog with just an ellipsis in it: "Okay, how would you say that?"

Felicia, reading: "'I told you it was stupid to bring someone like HIM along!'"

Ryon: "These people are typical YouTube commenters, aren't they?"

Felicia: "They are. Timothy—"

Ryon: "After decades of being laughed at by Elliott and Timothy, he has a rusted sword. This town's about to get interesting."

Felicia, reading: "'Legend has it that our village is finished…' Oh no!"

Ryon: "Could you use any less of a colloquial term, maybe something with some more gravitas?"

Felicia: "If this was the one thing in the village that was gonna mess it up, you would think they would have sent a message out."

Ryon: "Yeah, they would have like put a sign there. 'Hey, FYI, learn to push through the plants.'"

Ryon: "Wow, earth's asshole just opened up and I fell in."

Felicia, reading: "'That appears to be the real Mana Sword.'"

Felicia: "'It is supposed to be pulled out by a knight in times of great trouble.'"

Ryon: "Or a complete fuck up in times of peace."

Felicia, reading: "'The reason why monsters have appeared is because you removed the sword.'"

Ryon: "Alright, enough of the blame game! Let's concentrate on building a bridge and getting over it, okay?"

Ryon: "They're bribing me to get the fuck out of town."

Felicia: "Wait, can you get that armor right there?"

Ryon, reading "but…": "Uh oh. 'But…' I think there's some unimaginable cruelty coming right here. If I press 'B', my heart's about to just snap in twain."

Felicia, reading: "'Have everything you need?'"

Ryon: "I don't have true love. I don't have a real father. I'm not properly equipped to be kicked out of the only home I've ever known."