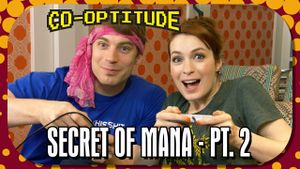 Felicia, reading: "This is Kippo Village.' And they don't hate you."

Ryon: "Yet. I'm sure I'll fuck up something soon, and they'll banish me too."

Felicia: "These are very low-slung bees. They can't get over."

Ryon: "Low-slung bees? They can't fly over flowers. Low-hung bees. Not what you think it means."

Ryon: "Oh, bee was carrying a chest. I'm gonna shake it like an English nanny."

Ryon: "We're in the animal shelter, and we're killing their excess stock."

Ryon, opening chest: "Headgear? Headgear? Oh, look at that. That is nice."

Ryon, reading: "'Show me that sword.' I heard that last night."

Felicia: "'It's covered in rust'? You heard that."

Ryon: "Oh, maybe try going to some of our beautiful shows or buying from the beautiful dwarf shop. Buy some tchotchkes."

Felicia: "Why am I so much weaker than you? Do I have any other abilities that compensate for my weakness?"

Ryon: "They gave us one of those vibrating coasters, like at the restaurants. Like, bzzt-bzzt-bzzt. Your axe is ready!"

Felicia: "No, we gotta fucking buy shit for our loser here. The red-headed step—"

Ryon: "Oh, now we get to play fucking dress-up while Bad to the Bone plays, like a shitty Tom Hanks movie from the 80s? Like do some modeling thing, and we'll look at her like this [arms crossed, shaking head no] until she gets to the right outfit on, then we're like that? [shakes head yes]"

Felicia, killing bees: "Bee all you can bee: dead."

Ryon: "She squeezes out a level."

Felicia: "What are we supposed to do? This is frustrating."

Ryon: "We've been at it for like two minutes."

Felicia: "Yes, it's frustrating. I'm a modern gamer. It needs to be apparent or I use a cheat code."