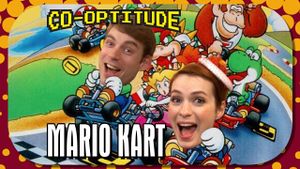 Felicia: "But, you know what? We're gonna try to amuse you with our enjoyment, which probably won't work."

Ryon: "You'll have to enjoy my completely whupping her ass instead."

Ryon: "It's a good substitute."

Felicia: "What are we gonna do with it?"

Felicia: "Dude, that's not your catch—"

Felicia: "No, you have to say your catchphrase."

Ryon: "Let's put this game in the console and power it up! Let's power this game up!"

Felicia: "I feel like at the end, this is just the preamble to fighting to the death in a jousting match. You know what I'm saying? Like, this is the Hunger Games of this world."

Felicia: "No, the fucking— What is the turtle's name? I'm blanking now, I'm so excited I'm in first place."

Felicia: "It's not Bowser, man, I know Bowser."

Felicia: "You're such a shit talker."

Felicia: "Well, look at him. It's going up his crack."

Ryon: "You can't even fit a toothpick in there."

Felicia: "That is a French-cut onesie, okay? It's going up his butt when he's sitting down, okay?"

Felicia, in bad Italian accent: "Would you like-a a mushroom-a?"

Ryon: "Oh wow, that's so ethnically wrong. I don't even know what to say to that."

Felicia, in bad Italian accent: "Maybe you should open a pizza parlor, you stupid fuck!"

Felicia: "Toad, you're a pretty little Toad. You are. You can grow on any rock you [gets hit with turtle shell] WAAH, WHO THE FUCK HIT ME!?"

Felicia: "Pull it out, Toad. Come on, little mushroom. You're not a fungus, you're a fungi."

Ryon: "You just fucked up the stupidest joke in the world."

Ryon: "Luigi, I didn't mean all that stuff I said. I was just frustrated. I'm trying to coach a strong team."

Ryon, in bad Italian accent: "I chop-a that mushroom up and put it on the pizza! Chop-a the mushroom into bits!"

Felicia, trying to get Ryon's finger out of her face: "Get your finger— I don't know where it's been. It smells like chicken."

Ryon: "'Great race,' indeed. That was a story of a fall from grace, and then redemption, and ultimate triumph. Great race, indeed."