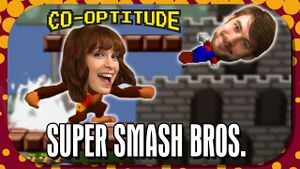 Felicia: "You wanna look up the provenance of [the game]?"

Ryon: "Yeah, go ahead, do the fucking iPhone thing."

Felicia: "It's 'the fucking iPhone thing,' not let's be educational and/or thorough."

Felicia: "That would be horrible. The professor would hate that shit."

Ryon: "And we got this little scrotum shaped motherfucker right here. Someone phoned it in on the art department. 'We have to come up with a concept for a character in a video game.'"

Felicia: "They were peeing and they looked down and they're like, 'Oh, there ya go. There it is! Right there!'"

Felicia: "This is how we hold [the N64 controller]. That's what the internet told me last time, 'You dumb bitch.' You gotta go up here. Up here. Up here."

Felicia: "Everybody always complains that we don't look at the instructions."

Ryon: "Well, they're gonna get more of the same, because if we start doing what they want now, where does it end?"

Ryon: "Pretty soon they're gonna ask us to be good at it, and then where will we be, right?"

Felicia: "That would require effort."

Ryon: "We'll be practicing for hours before we film this shit, and I just can't see myself ever doing that."

Felicia: "Okay, no effort. 'Co-Optitude: Whatever.'"

Ryon: "Oh dude, if you put this in a YouTube video people are gonna be like, 'You're a fucking fake gamer because you don't know who Cedric Falcon is."

Felicia: "I don't know who C. Falcon is. I don't know. But I don't like his face. Calcium Falcon."

Ryon, as Calcium Falcon: "'Makes your bones strong, buddy!' He's like a spokesman for calcium awareness."

Ryon: "Folks, I think she wants to know how to jump."

Felicia: "Did you figure out how to play, dipshit?"

Ryon: "But I bet Yoshi's got a very happy girlfriend. Look at this. [makes Yoshi's tongue go out]"

Ryon: "Just like Bomberman, I rely on your incompetence to win."

Ryon: "God, his asshole must be like two feet wide. Look at this. [swallows Felicia's character and lays a huge egg]"

Ryon: "So, reptiles and birds don't have assholes. They have a cloaca which is like a one-size-fits-all hole, like everything goes in there."

Ryon: "I'm gonna do Jigglypuff because it sounds like a Black Eyed Peas band member."

Felicia: "'Have some kale! Also, spinach is a good source of calcium!'"

Ryon: "'Cruciferous vegetables have a lot of calcium in them.'"

Ryon: "Yoshi's got a bright future ahead of him in a certain film industry, that's all I gotta tell ya. He's got no gag reflex, he's got a long tongue, he's got an asshole that could admit the Empire State Building."

Felicia: "Okay, I'm ignoring everything you're saying because I'm serious about becoming a Smash Brother."

Felicia: "Why can't you play Toad? I really love Toad."

Ryon: "Because there's already enough little scrotum shaped characters in the game without having to do Toad too. There's one here, there's one arguably here—"

Felicia: "If your scrotum is shaped like Toad, that's a problem, alright? That's what I'm gonna tell you."

Ryon: "What is it? 'Doctor, doctor, I have a problem. I think I'm a dog.' And the doctor's like, 'How long has this been going on?' And he's like, 'Since I was a puppy.' [waits for Felicia to laugh] Eh? I think I got that off of a popsicle stick."

Felicia: "Okay, look at him. Just get out of here. I don't wanna see you gloat, you scrotum. Bubblegum piece of shit."

Felicia: "By the way, when the pee pee comes up, that means death."

Felicia, about Fox's noncommital congratulatory pose: "He looks like he's above this. It's as if his agent placed him in this for money, like it's a sponsorship deal, and he's like, 'I'd rather get on with saving the universe.'"

Ryon: "It's like Jodie Foster in Elysium. Fox is phoning it in."