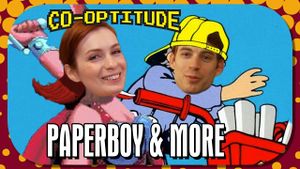 Felicia: "From what I remember, you can be a warrior, a valkyrie, like an archer elf—"

Ryon: "You read that— You didn't remember that. It's right on the cartridge. You're like, 'From what I remember, you either have Conan there, Red Sonja, Gandalf, or Legolas. That's what you got.'"

Ryon: "Badly? Would you say you need food badly?"

Felicia: "I'm gonna try to use a little strategy and back myself into a corner."

Ryon: "Oh, Goofus stands out in the open and gets surrounded by ghosts, whereas Gallant stands in a doorway."

Felicia: "Oh god. You know what, when you run into them, they take your health."

Felicia: "God, I don't like this boomerang thing. It's like you're shooting eyelashes and mustaches at everybody."

Felicia: "You could do an inventive indie twist on [Vapor Trail], like it could be a mustache and a top hat that basically spits cigarettes at Starbucks. Right? That would be the hipster equivalent."

Ryon: "What kind of fever dream is that? Yeah, a top-down hipster-based shoot-'em-up? You're riding a fixie? Your fixie has like guns on it or something like that?"

Felicia: "Exactly! That's what I'm saying. You can make a fun variant on this type of game."

Ryon: "You have to liberate the vintage clothing shop and artisanal denim."

Ryon: "I think this is a David Lynch game. That's the only explanation, is David Lynch directed this."

Sean Becker, off camera: "Why would you think that the one item you can collect is sushi?"

Ryon: "Well, what else makes sense about this town?"

Felicia: "We're going to do one more easy round, and I know we said we wouldn't do more, but I'm a liar."

Ryon: "That's all there is to it. You're a fucking liar."

Felicia, after Ryon crashes yet again from going too fast: "You're so— You've got— How many times do you have to watch me do this to be like, 'Oh, that's a better way to go'?"

Ryon: "I gotta learn at the feet of the master, is that it?"

No character creation, per se, although Felicia enters her high scores into Paperboy as "FELICIAA" and "FELICIA"