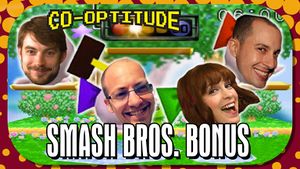 This is the first time bonus content was made for a Co-Optitude episode.

Ryan Copple (RyCo): "So what does the— Yeah"

Ryon: "So apparently these two have played the game before."

Sean: "You guys are the experts."

Ryon: "Well guys, you see, after a play-through we learned a lot and we might be able to give you a couple of tips, so don't worry."

Felicia: "Oh, have you seen the show?"

Ryon: "Don't worry if you don't do well at first. We are here to guide you through your journey of learning."

Sean: "You're halfway there."

Ryon: "Yeah, do you wanna do my part next time?"

Ryon: "How is pinkness and a clitoris hood gender neutral, Sean? Answer me."

Felicia: "Jigglypuff, one day when you hit puberty you're gonna have to grow some hair."

Felicia: "This is four-on-four Jigglypuff right now. This has never happened in the history of Smash."

Ryon: "I think it's called a circle puff."

Ryon: "So look, she inflates herself and floats and then: queeeeef."

Ryon: "[sigh] Samus is taking everything up the pooper right now because she sucks."

RyCo: "She does like it in the pooper. That was part of the—"