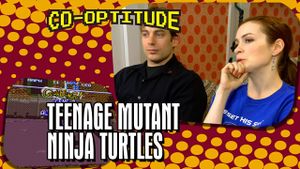 Ryon: "So, small fact: 80% of the room on the cartridge was used for that digital laugh."

Ryon: "He looks like a keyboard player from a prog-rock band, like floating around on stage. It's Rick Wakeman. That's who it is. Does anyone know who Rick Wakeman is? Anybody?"

Ryon: "She didn't do anything. She was like tits on a nun."

Felicia (speechless for several seconds): "I don't even know what to say to that."

Ryon: "It's like a TV sale at the Best Buy. They're all on Shredder so you can compare the picture."

Felicia: "So in 8 years this is what's gonna happen, guys. Er, seven."

Ryon: "Shredder is really frustrated by Krang. Like, 'Come on, man.'"

Ryon: "The entire Rush album compilation stacked end on end towards the sky"

Felicia: "That oldest turtle who recently died, I want to dedicate this review to him"