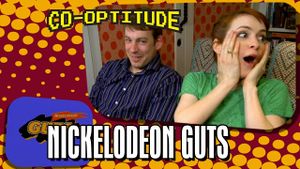 Felicia: "I never saw Guts. Did you watch Guts?"

Ryon: "I never— I think that was slightly after I stopped watching Nickelodeon."

Ryon: "I have no comeback. That was really good."

Felicia: "Oh, we have to have a nickname!"

Ryon: "Alright. Felicia 'The Fuckface' Day. That has a nice bit of alliteration to it."

Felicia: "When you say it like that it's not— No, I'm changing it. I'm gonna be The Teapot. Felicia 'The Teapot' Day. Tip me over, shit will come out."

Ryon: "Alright, that was the opposite of fun."

Ryon (after player falls 20 feet): "Boy, if this is what it was like, a kid had to have died on this show."

Ryon: "Like, before he went on Guts he went to all the kids in school and was like 'Hey, guys, I'm gonna be on Guts!' And then he like gives the worst Guts performance in the history of the game."

Felicia: "You know what, it's not even worth it. I'm sweating, I'm angry. I'm angry! I'm physically angry at this game. Why would you give this to a child? I mean, it's failure! There's no hope to win in this game."

Ryon (as Felicia's character is climbing): "You're at the end of your rope, would you say?"

Felicia: "Four foot. Standing jump. That's what this kid is able to do."

Felicia: "You could cut me with tiny razors and it would be better than this. Little tiny razors."

Felicia: "Everybody's watching me thinking, 'I could do a better job.' You fucking couldn't."

Ryon: "Someone's going to respond with a YouTube video of a speed run."

Felicia: "You know how sometimes in the Middle Ages they would open somebody's abdomen, take their guts out, and then strangle them with them? That's my rating."