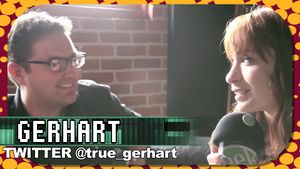 Gerhart (referred to only by his last name) is a gamer who was the previous owner of the Goldeneye N64 cartridge featured in Episode 7, which he signed prominently with permanent marker. Felicia and Ryon joke a lot about who the mysterious "Gerhart" is and asked the audience to please step forward if they are that Gerhart.

Eventually the real Gerhart was found, and Felicia did a short video at San Diego Comic Con interviewing him.