Felicia and Ryon play Nightmare on Elm Street and Friday the 13th. 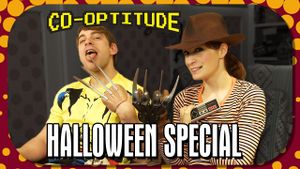 Felicia: "I am so scared of your claws right now. Stop it! Be careful with those fucking claws! What does he do with those things? How can he embrace anyone?"

Ryon: "But the only thing you have to do to defeat Wolverine is having armor thicker than this length [pointing to length of claws]. That's it. No one's thought of that in the comics yet."

Felicia: "But what about that rock from the Herculoids?"

Felicia: "Yeah. That was my favorite cartoon, by the way."

Ryon: "Those little blobs and the rhino with the gun horn?"

Felicia: "Gloop, Gleep, what are the other ones?"

Ryon: "They actually have names?"

Felicia: "They all had names! Are you ignorant?"

Felicia: "Oh no, those were not shitty. That was one of the best cartoons ever made."

Ryon: "Jason versus Freddy. Not in the games, but in the war of public opinion."

A Nightmare on Elm Street

Ryon, pointing to Freddy on screen: "Still, a pretty good resemblance. Good job on the costume."

Felicia: "How you doin' over there with [those Wolverine claws]?"

Ryon: "Pretty good, I mean, obviously Wolverine has the benefit of having retractible ones, but I could see how that would interfere with your day-to-day life if you couldn't retract 'em. You sure could scratch an itch like a motherfucker though."

Ryon: "Well, here's how we know this wasn't real. You're an angel? I think not."

Ryon: "You know, Freddy was a child molester in the movies. Did you know that?"

Ryon: "So you're dressed up like a child molester right now."

Felicia: "God dammit! If you run into him, his fucking crotch rot gets you in the face."

Ryon: "Yeah, I was wondering why […] you would have to collect bones. You get points for bones."

Felicia: "So basically we're trying to find the corpse of Freddy, put him back together, and maybe shit on him."

Ryon: "Freddy, why didn't you put your bones in one place like a normal person?"

Ryon: "Oh, that's Freddy's boom box. You have to collect that too. You can play some of Freddy's jams. Freddy's favorite jams while you desecrate his corpse."

Felicia: "He left us a mixtape, guys."

Felicia: "Why is he made of all femurs? He's only made of femurs, guys!"

Felicia: "They're all the same size! What about like the forearm, or the skull maybe? A toe bone."

Felicia: "You gotta wait for him to go down and then punch—"

Felicia: "If you look at the background a little bit, it's like those things you unfocus your eyes and you see like a donut come out."

Ryon, laughing: "What, the Magic Eyes?"

Felicia: "Donuts. There was nothing ever in there except waves and donuts."

Ryon: "Waves and donuts and boats and shit."

Felicia: "Boats, yeah there was a boat sometimes."

Ryon: "That's the biggest key in the world! It's like a novelty key to the city! Like, you're walking up to the door, [grunts] [makes big turning motion]"

Felicia: "We're like this— [notices enemies are attacking] Oh! No humor! Nothing ever stops here!"

Off-screen: "Was that the devil out for a jog?"

Ryon, about Freddy opening screen pose: "He looks like he's trying to like dry his nail polish, doesn't he?"

Felicia: "'Look at this, razzle-dazzle!'"

Ryon: "Those are some serious Lee press-ons, that's all I gotta say."

Felicia: "Gel manicures are a new nail technology where you can have it baked on, and it lasts six weeks. Three to six weeks."

Ryon: "Did we go through the entire town?"

Ryon: "So the entire town has two houses, a junk yard, a cemetery, and a high school."

Felicia: "God damn, he's got a Nike Fuel band on. He will not stop."

Ryon: "Oh, there we go. We just have to fuck around and wait for Freddy to show up?"

Felicia: "Well, he has another appointment. He was fucking busy. His assistant double booked."

Ryon: "Oh, I gotta watch you be really bad at this."

Ryon: "Ha ha, she has really bad posture. She's twerking. Like look at that."

Felicia: "She's not twerking. Twerking is when you bend over and shake your ass in peoples face."

Felicia: "I gotta turn around—"

Ryon: "Look at the map. Look, stop and ask for directions."

Felicia: "Never. I never do that. I'm never gonna read the instruction manual, I'm not gonna ask for directions."

Ryon, on what look to be children in room: "Those are either space suits that you can get in, or they're just like hung up on the wall like trophies, or it's just really fucking creepy. Choose one of the three."

Felicia: "Can I cure them? Take? I wanna take all the children."

Ryan Copple off-camera: "Are you pushing anything?"

Ryon: "You know there's only like five buttons on the NES controller, RyCo."

Ryon: "You can't tell me that's not twerking!"

Felicia: "Okay, okay! It's twerking. I'll give you that one."

Ryon: "Did you choose Miley as the camp counselor?"

Felicia: "Okay, stop. Can you please rescue the stuffed children?"

Ryon: "Okay, I'm done. That's it. Humor mine has been exhausted."

Ryon: "Where is she shooting those from? That's all I wanna ask. [laughing] She's shooting ping pong balls out her hoohaw. Look! 'This is my vagina's time to shine, so to speak.'"

Felicia: "Would you please look at the map! We got to start all over."

Ryon: "No we don't. She's just shooting ping pong balls out her vagina. That's what it is."

Felicia: "They're not coming out— They're coming out of the back of her head. I can't even agree with you."

Ryon: "Look how many counselors have died. They're dropping like flies. They're gonna have to put something on Monster.com for some more counselors. 'Help wanted. Counselor at murder camp. Camp Crystal Lake.'"

Ryon: "Okay, so the only minority character is definitely going to die. There's only one black guy? He's fucked. He's fucked."

Felicia: "No, this is the revisionist history of these kind of—"

Ryon: "Wait, they're gonna let the black guy be the hero?"

Ryon: "Alright, this is it. We're retelling the story of every horror-slash-cop-slash-any film ever."

Ryon: "Alright, it's your time to shine. [character is killed immediately] Well. Alright. We are not going to— That trope is going to be alive and well for a long time to come."

Ryon: "But, see, what I don't understand is like this franchise is really old."

Ryon: "Why would you ever send your kid to Camp Crystal Lake ever? 'Oh yeah, honey, go to the murder camp.'"

Felicia: "Are you really gonna put that much effort into researching the camp your kid goes to?"

Ryon: "No, you just want to get them out of your life for the summer, right?"

Felicia: "We don't have children, obviously."

Felicia: "Dude, what are you doing? There are children dying right now, and you're spelunking. Chrissy, you self-centered little bitch. Get out of there!"

Felicia, reading game over screen: "'You and your friends are dead.'"

Ryon: "Does what it says. It's like, no fancy talk, just some really descriptive— But I bet when you kill Jason it just says, 'You have killed Jason and your friends are alive. Game over.'"

Ryon: "So we almost got to the end. From that perspective, we almost finished the game."

Felicia: "Don't pretty much get anything for free."

Ryon: "Don't get into any windowless panel vans."

Felicia: "Yeah, none of those."

Felicia: "And have a great night!"

Ryon: "And don't trust anybody who's dressed like a hockey goalie."

A Nightmare on Elm Street