Felicia and Ryon play Pokémon Stadium and Hey You, Pikachu! 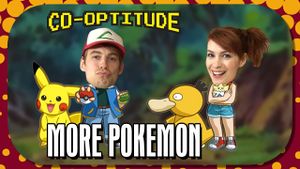 Felicia: "And I'm Misty something."

Felicia: "I have not learned much about the Pokémon universe since the last game we played, have you?"

Felicia: "So we didn't do our research, but we did put outfits on."

Ryon: "We did, so that should give what we say more gravitas and veracity."

Felicia: "Okay, here we go! We're gonna rent some animals and fight 'em! But they don't die; they just 'faint.' They 'go to the farm.'"

Felicia, laughing: "How do you have a thing called Squirtle?"

Felicia: "I believe that Psyduck is a water animal, so I have to go with that, because that's Misty's speciality. 'Cause I went to Wikipedia, bitches."

Felicia: "I'm gonna take that color right out of your cheeks, you little fuck."

Felicia: "Okay, so— No, just pick. We don't need to be a fucking expert at this."

Felicia: "I wanna specialize in, ooh, 'fighting'? Yeah, it's a fighting game. So specializing in fighting, yes."

Ryon: "That seems like a pro tip to me."

Felicia: "Did you get Pikachu?"

Felicia: "Aaand, Lickitung. [laughing] I just gotta get that one."

Ryon, laughing: "I think he and Squirtle would get along really well, what about you?"

Ryon: "Oh. [Felicia's Pokémon faints] Man, not a scratch. Good job, Aerodactyl. You're gonna get an extra pound of meat in your cage tonight."

Ryon: "The VMAs are all yours."

Felicia: "See you next Tuesday!"

Felicia: "Oh, this guy's the worst! This guy only has two abilities. Who added him to my roster? Me."

Felicia, as Mom: "'Don't forget the PokéHelper that Prof. Oak sent.' I'm gonna go have sex with the plumber."

Felicia: "Everybody just go out and capture wild animals. Do what you want."

Felicia, talking into microphone: "Pikachu! Get over here, buddy! Uh oh, he's like, 'I don't trust this. I think you're gonna capture me and make me fight other people.' Hey Pikachu! Come over here! I just wanna put you in a cage! I wanna put you in my bedroom and never let you see anybody like yourself anymore! Hey! PIKACHU! PIKACHU!! I'm saying something! Get over here!"

Ryon: "Alright, Professor, if you are indeed a professor and not just some guy who put an ad in Craig's List. 'Wanna work with wild animals?'"

Felicia, as Mom: "'Welcome home. You sure look happy. Did the test go well? Is that so. You got to talk to Pikachu—"

Ryon: "Mom didn't even wait for me to respond."

Felicia: "Phoning it in."

Ryon, as Mom: "'Why don't you go out in the woods with that older man again tomorrow?'"

Ryon prepares to speak into the microphone to wake up Pikachu

Professor Oak's dialog box: "What on earth did PIKACHU pick up?"

Ryon, laughing: "Well, Professor Oak, I'm no expert at these matters, but I think it was a ball."

Felicia, reading Professor Oak's dialog: "'I guess it a [beach ball].' Thank you, PhD in balls!"

Off-screen: "This game is for toddlers!"

Ryon, as Pikachu produces an apple from nowhere: "Whoa, what? Where'd he pull that from? I don't wanna know."

Ryon, as Pikachu: "'I touched your hair while you slept!'"

Felicia, as Pikachu: "'I thought we could take a bath together!'"

Felicia, as Mom: "'Have a nice time! Take care! I'm gonna have sex with the plumber.'"

Ryon, as the protagonist: "'Mom says the plumber needs to lay some pipe. Boy, our house sure has bad plumbing.'"

Felicia: "He's a Pokémon professor, and yet he's never seen the daily activities of a wild Pokémon!? Who is this joker?"

Ryon, as camera ominously follows Pikachu into dark woods: "In 1998, a small boy disappeared in the woods while playing with his wild Pokémon. We found this footage from a camera deep in the Ochre Woods."

Ryon: "What is he carrying? What is that?"

Felicia: "He's just picking up anything. It's a fucking razor. Just put it on my wrists."

Felicia: "Yes, he will. Spoiler alert."

Felicia, as Mom: "'Have a nice time! Take care.' I'll be having sex with the plumber!"

Felicia: "That's Professor Oak's handwriting. He only has crayons in his backpack."

Felicia: "Oh! Charmander's up there."

Felicia: "He has a rifle in his hand."

Felicia: "Do something with Oddjob or whatever the fuck his name is."

Felicia: "I would rather babysit a two-year-old than play this game more now."