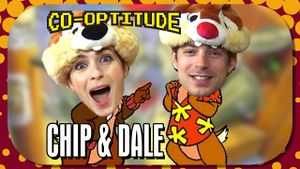 Felicia: "I am a fan of chipmunks and— in person, authentic chipmunks."

Felicia: "Would you say I'm a chipper?"

Ryon: "I don't know. How into chipmunks are you?"

Felicia: "If I were a furry I'd play a chipmunk."

Ryon, laughing: "So they're like, 'Let's name some male strippers after the cartoons.'"

Felicia: "Yes. This is the thing though. Um, I don't think they have a video game starring the Chippendales. If there is one, we're playing it."

Ryon: "If there is one, we're playing it next week."

Felicia: "Let me tell you a little bit about Alvin and the Chipmunks. Alvin is the singer. He's the precocious one. Simon— They were part of a long lore of single men living with animals in the '80s."

Felicia: "Okay, so Dave and Alvin, Jim and Garfield, Man in the Yellow Hat and Curious George. Can you name other single, put-upon men with wacky—"

Ryon, as commenter: "'Hey, fucker, you forgot this obvious one!'"

Felicia: "I never understood the bug companion. What is that guy? He's a fly? His lifespan would be like two days."

Ryon, laughing: "He keeps a bunch of fly eggs, like—"

Felicia: "Gadget's the girl. She's the mouse, who they cannot have trans-species sex with. It just won't work. Their baby would be a mutant."

Felicia: "Why are we bothering? Just let the robot overlords rule us."

Felicia: "We gotta get a degree in this."

Ryon: "Okay, I'll get the flowers and then you—"

Felicia: "And you get all the one-ups? Yeah, that's a really good—"

Ryon: "You turn the faucet handle and I'll do the flowers."

Ryon: "There ya go. See how well this teamwork works out?"

Felicia: "This is the most unclean kitchen I've ever seen in my life."

Felicia: "You know what, chipmunks have glands. I'm gonna rub my glands all over these— Look at these glasses. They're gonna be served to customers. I'm just gonna— [rubbing gesture]"

Felicia: "'How did I get this sore on my mouth?' Chipmunk glands."

Ryon: "I went to eat at my favorite restaurant in LA. I got chipmunk disease. Chip 'n Dale are patient zero."

Felicia: "Whoa. Water is bad for chipmunks. They never bathe. Their glands can't take it."

Felicia: "God, why can't we better than this? Why didn't our mother teach us younger so our hand-eye coordination was better?"

Ryon: "You know what? We should play a game we'd be good at, like Dr. Mario or Tetris. We'd be idiot savants. They'd be like, 'Wow, those guys are legit after all. Maybe they're not fake geeks.'"

Felicia: "'So fucking fake. You don't know every Pokémon ever? Fuck off.'"

Ryon: "Rubber balls are the only thing standing between Earth and alien invasion. And the fact the aliens are like an inch tall."

Sean Becker, off-camera: "I remember being 8 and passing this game."

Felicia: "You're just gonna get us past because we're so bad?"

Felicia, watching Sean play: "God, this is what everybody wants from Co-Optitude. Competence, skill."

Felicia: "Oh, this is fun. The less I talk, the better I am. I just wanna be honest."

Ryon: "I agree. The less you talk, the better things are in general."

Ryon, about owl boss dropping harmful feathers: "Because nothing hurts like a feather."

Felicia: "Avoid the feathers. They're sharp. They're like razors."

Felicia: "Bye, owl! So much for your wisdom or your lollypop licking."

Felicia: "Oh, here we go, because nothing says 'library' like a kangaroo playing badminton."

Felicia: "We're gonna finish our last continue. We are not gonna give up. We are Chip 'n Dale Rescue Rangers. We will have ten to fifteen chipmunk animals—"

Felicia: "5 of these faces [puffs up cheeks]"