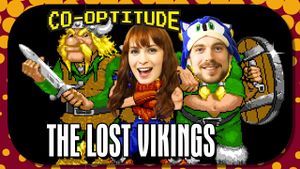 Ryon: "This is a puzzle game, and so as you guys remember from the Goof Troop episode, we are super good at solving puzzles. We're both college graduates from a highly-ranked state university."

Ryon: "Computer science, yeah, so clearly anything to do with computers or problem solving on computers we're gonna be [snaps fingers] solving like that."

Felicia: "We're gonna be acin' it! Boom! Prepare to be bored at our expertise."

Ryon: "Yeah, we actually might get through this entire game before the episode ends, so, you know, might be a short episode."

Ryon: "Let's place this cartridge in and enjoy gameplay."

Felicia: "How would you refer to that cartridge?"

Felicia: "A fucker. I want a catchphrase. You have all the catchphrases."

Ryon: "Uh oh, I think that portends something awful happening to these people. 'Thank god I'll never have to leave my home. I'm retiring in two weeks. Nothing could happen to me or my family now.'"

Felicia: "This is not that hard now."

Ryon: "So, I just wanna observe right now that we actually failed this puzzle once."

Felicia: "It's the intro puzzle."

Ryon: "It wasn't even a puzzle. It was moving."

Felicia, reading in attempted Norwegian accent: "'Will you guys-a just shut up and follow me!'"

Ryon: "They're not Italian vikings!"

Felicia: "I don't know how to do a Norwegian accent!!"

Felicia: "This is just a series of fucking suicides!"

Felicia, reading: "'Croutonian'? What are we on fucking—"

Felicia, singing: "Every now and then I get a little bit viking in my—"

Felicia: "God, this is not that ha— I'm not gonna say 'not that hard' because then we're gonna start—"

Ryon: "Because then there's gonna be one we can't get by, and Sean's gonna edit it so that it goes back to you saying that, and then it's gonna result in laughter."

Felicia: "You know what's nice about this space ship? They assume that somebody's never been on a space ship and needs to be trained."

Ryon: "Yeah, would know your way around. Because a lot of alien races build puzzles right into their space ships. Imagine being a crew member, right? It's like, 'Fuck, I need two other dudes here.'"

Felicia: "Really? This isn't intuitive? Really? Do I really have to do a sign here?"

Ryon: "This is good design."

Felicia, reading: "'You must be one of the aliens that the Croutonians'—"

Felicia: "Yes, the Friséeans are after us! Commander— Commander—"

Ryon: "Drawing more water from that dry well. You're like, 'There's gotta be a joke in here somewhere!'"

Felicia: "Commander Kale's after us! [reading] 'Who are these Croutonians, and why did they bring us here?' They needed some bacon. 'Tomator'!?"

Ryon: "This is a salad analogy, you're right!"

Off-camera: "What do you want from Jamba Juice?"

Ryon: "I want Peanut Butter Moo'd Smoothie. It's the most unhealthy thing on their menu."

Felicia: "Mushroom world! Because there's nothing too crazy for these game designers."

Felicia: "It's really passive-aggressive. 'Give it up!' Why don't they just go, 'Be better? Yes/No'."

Felicia: "God, it smells like peanut butter in here. What did you get?"

Ryon: "It's the most unhealthy thing on the Jamba Juice menu. I think it's like 5,000 calories or something like that."

Felicia: "This is super fun in the most frustrating way possible. That's all I have to say."

Felicia, after sipping Ryon's Jamba Juice by mistake: "EW! THAT'S YOURS! GROSS with the peanut butter!!"

Ryon, laughing: "This makes my phlegm so thick my voice goes like three octaves lower."

Felicia: "SEND IT OVER!! Be the redhead and go get the button to go through the back door."

Felicia: "God, this is certainly something that's annoying right now."

Ryon: "That sounds like something you get at Sizzler. For dessert. At Sizzler they should have like a blender bar where it's just a bunch of things in a blender, so you can take the blender cup and just put in whatever, and then like they blend it for you and you can drink it. Right? You think they would go for that? The typical American— GIMME THAT! [grabs Felicia's controller]"

Ryon: "Ya know, if Shieldy could jump, he could finish this whole game."

Felicia: "Well, that would ruin the whole game then! Can we please get past this level!?"

Felicia: "Life is so short, and this is what we're doing with it."

Felicia: "If we had eight more hours to play the game for you, we would love to show you more. Unfortunately, we have lives to live, and this game is already—"

Ryon: "But we get the idea. Solve puzzles, discover friendship along the way."