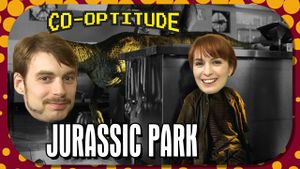 Felicia: "This is where I play retro games with my brother."

Ryon: "And this is where I play retro games with my sister."

Felicia: "Who I'm not looking at 'cause he's disgusting."

Ryon, stroking his beard: "I wonder what it could be."

Ryon: "I don't know what you're talking about."

Felicia: "I don't know, it's like somebody drew Sharpie and then it grew hair. Internet, please leave in the comments what you think he should name this facial hair configuration."

Ryon: "I wanna be the creepy Jeff Goldblum character if that's an option."

Felicia: "You are right now. You are already halfway with that facial hair. I can't look at you!"

Ryon, quietly: "What are you doing?"

Felicia: "You gotta put it in."

Ryon: "You know, these [soldiers] are just like dinosaurs, right? They just kinda run toward you."

Felicia: "They are. They just stampede your ass."

Ryon: "They're a stampede of people!"

Ryon: "So I know people don't like us saying bad things about games, but this really is a steaming pile of shit. I just wanna put that out there and just say that just because it's old doesn't mean it's good."

Felicia: "I wanna tell you right now, I'm having a really good time. I kinda like this game. I really like it. It has no logic whatsoever. It's like a bad B movie that you—"

Ryon: "What's not to like!? We got two directions of freedom."

Felicia: "Okay, this is fun. We are gonna do this. This is a super fun game! I can't believe you don't like this game!"

Ryon: "I can't believe I wasted my sweet mustache on this game."

Felicia: "This is the worst army. Like, they just run into you. They don't use any of the fucking weapons they've been given."

Felicia: "Oh, because we mastered that one, too."

Ryon, finding giant nest: "Oh wow, mama bird come and drop something in my mouth. Feed me a worm. Man, that would make a big-ass omelet, wouldn't it? The egg in there? You'd be able to feed hundreds."

Felicia: "I'm trying to avoid being killed by a floating vagina!"

Ryon, whispering: "Just get up there."

Felicia, laughing: "Are you talking to yourself or me?"

Ryon, whispering: "Get up there."

Felicia: "Are you talking to yourself or me?"

Felicia: "Did you really die?"

Felicia: "How is that possible!? Why are you so bad!?"

Ryon, laughing as Felicia falls: "How are you so bad, you fuck?"

Ryon: "Okay, as soon as we finish one level, that's when we can end the episode."

Ryon: "Now we have motivation."

Felicia: "My will is like sapped to the point where I kinda wanna sleep."

Ryon: "Yeah, we can. We're gonna run right through those fucking raptors. It's not even gonna be funny."

Felicia: "No, they come back!"

Felicia: "They jump! They come back!"

Ryon, laughing: "Augh, you motherfucking raptor you! Okay, speed run strategy not— [falls in a pit]"

Ryon: "Did you just electrocute yourself?"

Felicia: "We're committed to this!"

Felicia: "No, we're not best at anything!"

Ryon: "This is the one we're best at. This is our specialty."

Felicia: "I don't know what else to tell you. We tried."

Ryon: "I don't even know what to say. I'm disappointed. I can't even blame the game. Time and time again I did what I knew I shouldn't do, and it just did the same thing again."

Felicia: "God, I forgot about your face."

Felicia, final: "I literally want to take the cartridge and just kinda like gnaw it. Like literally bite it until it's ruined."

Ryon, final: "12 of those, because it was that much worse"