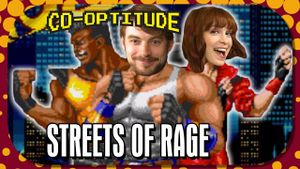 This episode is an extended edit of footage from The Flog episode 2, the very first video with Felicia and Ryon playing retro video games together.

Felicia: "This is— The graphics are not like they are now, are they?"

Felicia: "Sh— Okay, try not to— Try not with the profanity maybe."

Ryon: "You don't want the backstory? It's gonna immerse us in the game experience."

Felicia: "I don't even know what my buttons do!"

Ryon: "I think there's three of them. You can figure it out."

Felicia, as she pummels Ryon's character: "Come here! Come here! Oh no, I'm sorry! Oh, your health is going down."

Ryon: "We really are reliving our childhood with this."

Felicia: "We need to turn off friendly fire."

Ryon: "You can't turn off friendly fire. That's at least a 1998 innovation in video gaming."

Felicia: "Did you see me pick an apple up?"

Ryon: "Why would you want a gross street apple?"

Ryon: "That is the worst— Would you hold a pipe like that?"

Felicia: "Well, it seems like— No, I would not. It seems like you would hold it lower— You're holding it at the end so it's gonna— ergonomically—"

Ryon: "He's just learning how to be a vigilante. He'll get better at it."

Ryon: "My hands are cramping. These controllers are rough. They're not, like, ergonomic."

Felicia: "What, do you need them smooth, like a baby? I'll butter them for you."

Ryon: "I need like, ya know, a modern controller. This is like driving a Model T or something."

Felicia: "So much denim. Basically in the late 90s, denim was the enemy."

Felicia, examining item that came out of a broken barrel: "Ooh look, it's a family. I don't know, it's so indeterminate. Is that a birthday cake? I think it was a birthday cake."

Felicia: "It was a barrel cake."

Ryon: "Had to break a few eggs to make an omelet there."

Felicia: "Wow, that was folksy."

Ryon: "Streets of Rage, uh, you're on some streets, you're pretty angry, and you're just beating the crap out of a lot of guys."

Ryon: "I don't like clowns, personally. I gotta beat the crap out of this clown before we end here. I cannot continence this clown being here."

Ryon: "In the last closing moments I just want to beat the crap out of my sister here."