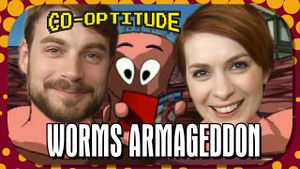 Ryon: "Is there a way I can get my own TableTop mug that I can enjoy my daily hot cup of coffee in?"

Felicia, woodenly to camera: "What a coincidence, Ryon."

Felicia: "There is a way to purchase this mug on the Geek & Sundry website."

Felicia: "If you want to be a virtual player of TableTop, you can go to geekandsundry.com/store and get one of these amazing mugs for the low price of [makes bleeping noises]. So if you enjoy TableTop mugs, or if you— [laughing]"

Ryon: "Are you a Topper? Show your support by getting a TableTop mug!"

Felicia: "And may I mention, [points to hair] look at this. New console, new hair. I'm sure two or three of you will express your opinion about it. I feel really good, except I feel like— It's a little phantom-limb-syndrome back here. I do tend to wear more long earrings to kinda simulate the idea."

Ryon: "So you're running your fingers through your long, dangly earrings?"

Felicia: "Yeah. Think I'm gonna keep it and not grow it out. Do you care? Not really."

Felicia: "Let's not change the show that much. New platform, new hair. That's quite enough."

Felicia: "We play worms, and it's gonna be hard not to make little chubby penis jokes, I'm just telling you right now."

Ryon: "So that'll be the first and only."

Felicia: "First and only! Just trying to get it out."

Ryon: "They're not little chubby penises. They're fleshy worms. That's all they are."

Felicia: "They're not really worms. Worms have— I don't know. Okay, let's not talk about it."

Ryon: "What— I kinda wanna talk about this. What do worms not have in comparison to penises?"

Felicia: "Well, they're just proportional. They don't have a bigger head than a back. You know? They're just basically the same thickness the whole way. And this worm is a little more well-endowed on the brain end."

Ryon: "Is that a situation you're faced with often?"

Felicia: "Well, more than two's just a gang. [to camera] Let's never use that."

Ryon: "Because they're little penises? Right?"

Felicia: "Yeah. Yeah— No, we're not saying that anymore!"

Ryon, laughing: "Fucking who are you, Coolio?"

Felicia: "Jump! Jump! For my love. [shout-singing through gritted teeth] Jump in! Jump in my heart! Can make you happy! Jump! I know what it takes!"

Ryon: "Oh, it worked. It worked. The Eurythmics. What is it, Eurythmics?"

Felicia: "It's the Pointer Sisters! Get your shit together!"

Ryon: "Those all sound like exotic sex positions. The concrete donkey?"

Felicia: "Alright, I don't think looking up instructions— I mean, if we wanted to have a three-week training session in Worms—"

Ryon: "That's not what Co-Optitude's all about."

Felicia: "Co-Optitude is about, uh, us stumbling through— I don't know what it's about. It's about— It's all about family. [laughs]"

Ryon: "Co-Optitude is about family and friends and good times and drinking tea from the coffee mug from a wonderful other Geek & Sundry show."

Ryon: "Just get over there, penis."

Felicia: "We were gonna be better and more mature! Finally, a new fresher Co-Optitude!"

Felicia: "You know worms on sidewalks? I always move them off. Just 'cause it's karma. One day, when you're dead you're—"

Ryon: "Not anymore. I'm gonna fucking kill every worm I see on the sidewalk. This is just the worst. Okay, well, I don't even know what to do now."

Felicia: "I always move them, and I put them in the wet grass. I put a little leaf on them."

Felicia: "I love the holy grenade! That was great, and the sound effect? Did you hear that?"

Ryon: "Alright, now I gotta look around. [singing to Total Eclipse of the Heart] Look arouuund—"

Felicia, singing: "Every now and then I get a little bit [unintelligible]"

Felicia: "Alright, I need to somehow get up your bucket."

Ryon: "That looked so much different when I ran it through my head."

Ryon: "You shouldn't even say those sorts of things."

Felicia: "What just happened? Nothing happened. [launches a missile as Ryon's character] Oh!"

Felicia: "I'm sorry! There was nothing happening!"

Felicia: "There was nothing happening. Now it's my turn again."

Felicia, eating cookies: "Why is there a cat hair in here?"

Ryon: "Why even bother with a new weap— Well, let's see what else I got."

Felicia: "Yeah, just go for the standard bullshit cheap shit that you do, you piece of shit. I'm out there adventuring, trying to find different ways to kill you. You're like [mocking noises]. [chokes on cookies]"

Ryon: "This is certainly some irritating fucking bullshit, did you know that?"

Felicia: "You died! You died!"

How Would You Arm Your Worms? - Co-Optitude Bonus Content