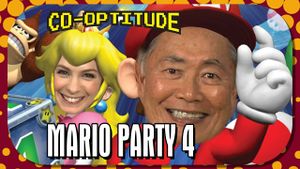 Felicia: "From what I understand, you have not played a lot of video games."

George: "No no, this is— yeah— What do you mean, 'Not played—' This is my virginal effort."

Felicia: "What? I'm taking your virginal effort myself? My goodness! I think this is the best day I've ever had."

Felicia: "We're going to play on the same team against the computer."

George: "I'm dependent on you to help me."

George: "Well, so you wanted someone who was just learning now to make you look even better."

Felicia: "I like the way that sounds. And to take your virginity!"

Felicia: "And we're gonna go ahead and give us a boost. [to camera] Whatever, guys! It's our prerogative to start off with whatever we want, and I wanna start with 9 stars. Because I have a 10-star person next to me right now. And I don't wanna hear any complaints in the audience."

George, laughing: "Whatever that means."

Felicia: "Do you want me to wear it?"

George: "It doesn't quite look like that. [gesturing to screen]"

Felicia: "I know. Alright, forget it! [takes off hat]"

Felicia, about Waluigi: "See? He looks unpleasant, like he would complain to a waiter about service or something."

Felicia: "You're keeping up totally fine. I'm throwing so much stuff at you, and you're like [snaps fingers] that. I mean, I'm surprised you've never gamed before."

George: "I've never gamed before. I told you I was a virgin."

George: "Are you sweating?"

George: "You don't sweat. Only horses do that."

Felicia: "We're just, uh— Oh gosh. Sorry, I didn't mean to bounce you out of Co-Optitude, Ryon. I had a better offer."

Ryon: "You go out for lunch and you come back and you've been replaced."

George: "Yeah, sorry about that. Your sister's very fickle."

Ryon: "Did George play better than I would?"

Felicia: "Super awkward. [shouting to Ryon] Maybe you can bring George his tea, Ryon, before you leave!"

George: "Thank you, thank you— Oh, you're being very disruptive. I lost the rhythm."

Felicia: "Yeah, I know! Because someone came in to deliver some tea!"

Felicia: "Despite the tea boy!"

Felicia: "Oh, he just robbed you. You just got robbed."

Felicia: "On the wrong side of town! This is crazy!"

George: "You know, I have a tendency to do that, hang out in the wrong places."

George: "I have a checkered past."

Felicia: "I have to say I'm really impressed."

George: "You are? I'm very lucky if I'm winning anything."

Felicia: "Your virginity was very tasty."

Felicia: "I've never lived anywhere where there's snow. Have you?"

Felicia: "Oh yes! You lived part of the time in New York?"

George: "We have a condo there."

Felicia: "That's very nice, to be able to be bi-coastal."

George: "You have opened up a new world for me. Thank you very much."

Felicia: "Thank you very much! Well, I loved having you on the show."

George: "I boldly went where I've never been before, and now I will live long and prosper."

Felicia: "You can be corny all day!"

Felicia: "So I guess I can't have you permanently."

George: "I'm afraid I'm gonna keep winning over and over again. That's not gonna be too much fun."

Felicia: "Alright, Ryon, you can have your job back."

George: "You know, I think it's wonderful that you two are maintaining a hallowed Hollywood tradition: nepotism."

Ryon: "Makes the world go round."