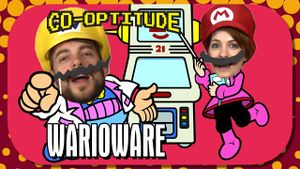 Felicia: "That's so funny, because I could have sworn I was sitting next to Wario."

Ryon: "It's just an amazing transformation."

Felicia: "Two different mustaches say two different people. You're a raging asshole, and I am a benevolent and fluffy man."

Felicia: "It's a mega party game! And we're gonna party with ourselves. This is our holiday party, right now. Don't feel sorry for us."

Felicia, as Ryon's creating his character: "Are you a boy or a girl?"

Ryon: "That's me. I'm playing and you're supposed to be fucking me up, so just do your usual thing."

Ryon: "No, not actually like fuck with me and annoy me."

Felicia: "Oh, it's too bad for you. Um, thanks for watching."

Felicia: "Why did you win!? What just happened!?"

Felicia: "It's because Sean behind the camera told me to wrap it up!"

Ryon: "I retire champion of Warioware Incorporated. All in a day's work."

Ryon: "I give this infinite thumbs up."