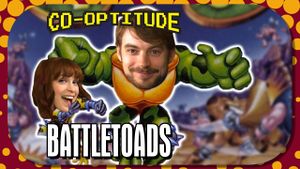 This episode is an extended edit of the retro video game segment from The Flog episode 39.

Felicia: "Oh, it's a whimsical animal."

Felicia: "It's a chicken. I hate chicken feet. In jeans? This is worse."

Ryon: "Put me down, motherfucker."

Ryon: "And you can't do anything about it! You just go limp like a possum."

Ryon: "It's like picking up a cat by the scruff of the neck. I've just gone limp. Like literally I can't do shit right now."

Felicia: "If you pick up a toad above your head like that it will go limp."

Felicia: "Well, game mechanics, they were hard nuts and not well thought out."

Ryon: "There's definitely a lot of 'fuck you' game play."

Ryon: "Alright, remember, you gotta hit 'em before you can mount them. They won't let you mount them unless you knock them unconscious first. There ya go."

Felicia: "I don't like how you say that over and over."

Felicia: "Any frog worth his merit— I have knee pads on, yet I can't kick."

Ryon: "Any frog worth his salt."

Felicia: "Any frog— No, you don't wanna put salt on a frog."

Felicia: "Oh my god, what the fuck is that voice!?"

Ryon, as chicken: "Bok, watch out, toads! There's bound to be a whole toad load of trouble braaawk get it, toads, you're toads!"

Ryon: "The urethra is the wookie hole?"

Ryon: "I'm never not gonna call it that now. Like if I ever go to the urologist, I'm like, 'Doc, are gonna like look in my wookie hole? It kinda burns when I urinate.'"

Felicia: "I have a burning wookie hole, doctor."

Ryon: "It burns when I urinate. I think I need you to look in my wookie hole."

Felicia: "You punched the pipe."

Ryon: "I punched the pipe. The stupidity never ends with this game."

Felicia: "This game has no internal logic."

Ryon: "That's such a subtle bit of stupidity, being able to kill a weapon on the ground."

Felicia: "Yeah, that makes no sense. I mean, it kinda does."

Ryon: "It's just non-stop bullshit with this game. It just never ends."

Felicia: "Jesus, tell me how you really feel."

Felicia: "Look at me, I'm trying to suck it and it won't happen."

Felicia: "Okay, we're gonna get down the wookie hole and then we're ending this fucker."

Ryon: "Get to the base of the urethra."

Felicia: "The stem. Where the balls are."

Ryon: "I think we got to the middle of the shaft."

Felicia: "God, it was such a long shaft. God I have a neck ache now."

Ryon: "Gotta get to the prostate."

Felicia: "Get down to the prostate, see what's growing down there."

Felicia: "I mean, there is no way to get them in your mouth!"

Ryon: "Why would they throw at you the exact thing you need to kill them?"

Felicia: "I mean, that's why good will always triumph evil. Because evil always has a mechanic that makes them a dipshit."

Felicia: "You wanna be on bottom or top?"

Ryon: "This is really horrible, and this should have ended by now."

Felicia: "No no, we need to get to the bottom of the urethra, cuz there is infection on the sides. There's like herp' in the middle, syph' in the sides."

Felicia: "Look at that. Look at the sperm. That's where the sperm are stored right below us. Look at that. Girls and boys! …That's not how it works, guys. Little girls and little boys! Jump in the sperm!"

Ryon: "Someone did not take biology."

Felicia: "Shut up. God dammit, stop it! You're like the internet!"

Felicia: "I did too. It was premature ejumpulation."

Felicia: "THIS IS THE WORST GAME EVER MADE!! It's literally the worst!"

Ryon: "Now, what I don't understand is how can they possibly call children of our generation have ADD when clearly someone had enough concentration to try this shit until they made it? Kids don't need Ritalin; they need to play this for like an hour and go, 'Now I know how to concentrate.'"

Ryon: "Please, go to the doctor. Go to your doctor."

Ryon: "Check your wookie hole for penis rats. Do it for you; do it for your family."

Ryon: "All possible thumbs down"