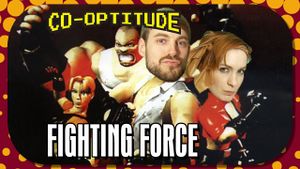 Felicia: "Alright, you guys ready? You ready to rock?"

Ryon: "You ready to be tough?"

Ryon: "You ready to beat our way through a fully immersive 3D environment?"

Ryon: "You ready to choose between two male and two female characters with individual strengths and strategies?"

Felicia, reacting to the cutscene being skipped: "Oh no!"

Felicia: "You wanna reload it?"

Ryon: "Okay, do I wanna be Canadian tuxedo here or—"

Felicia: "You used that one time before and nobody from Canada got that."

Felicia: "I forgot to be entertaining because I was so enthralled."

Ryon, picking it up: "Alright."

Ryon: "Look at it. It looks like a twig in his gigantic hands. [hitting enemies] Can I axe you a question?"

Ryon: "You're my worst enemy in this game. Half your destruction bonus comes from beating the fuck out of me."

Ryon: "Alright, well, wait. I thought I was invincible. Well, I guess I shouldn't be doing that, huh? I'll be the first person in the history of gaming to die with the invincibility mode on."

Ryon: "Oh, what? He's like, 'I've had enough of your silly martial arts shit. I'm just gonna bust a cap in your ass.' This valet's had enough of surly customers."

Ryon, noting names of enemies: "Kelly. And Sacha. [singing] Kelly and Sacha and Vixen and—"

Felicia: "Fuck you! Oops, sorry. I'm trying not to swear as much."

Felicia: "Is that a video store? That's how you can really know it's old fashioned."

Felicia: "Oh, what? That's like a troll from ZG in Warcraft."

Felicia: "Can you just put him down please? You're invincible when you're carrying that troll."

Felicia: "Could you put him down please?"

Ryon: "Do you think they're still taking bug reports for this game?"

Felicia: "He doesn't want to be up there!"

Off-camera: "Why did it explode?"

Ryon: "It's got a propane and propane accessories hotdog cooker, that's why."

Ryon: "What is this, a Dillard's over here?"

Felicia: "Oh, we probably have to go to Dillard's."

Felicia: "I heard they have a sock sale."

Felicia: "God, it's really gross when you do it [a swan dive]. It's not graceful. It's just weird."

Ryon: "The man wanted to be a dancer his entire life. He just wanted to dance. That's all he ever wanted to do was dance."

Ryon: "You know where he learned this move?"

Ryon: "From his figure skating career."

Felicia: "Oh my god, was he an Olympian?"

Ryon: "He was an Olympic figure skater."

Felicia: "He was an ice dancer."

Ryon: "I bet I can swan dive through the toll booth. No I can't."

Ryon: "The MTA guys aren't gonna like this. I don't know, maybe we do need to go into the turnstile. I mean, it makes sense, right?"

Felicia: "Yeah, it makes sense that we would go this way."

Felicia: "I don't think it's gonna do anything, dude."

Ryon: "Maybe we have to go actually buy a metro card."

Felicia: "Really!? They're going to make us— They're gonna— This game is gonna make us buy a metro card! Okay, let's try it. Buy a card. Can I buy a card? Nope."

Ryon: "Oh, maybe if we beat up the ticket machine. Oh wait, look look, here's the tickets. We got tokens. Subway tokens."

Felicia: "Oh. Oh god, we do have to do this legally! Amazing! Amazing! This game is amazing!"

Felicia: "I just wanted a simple life. I was a craftswoman. I had an Etsy store. There was no honor amongst Etsy dealers."

Ryon: "Look at those hands, man. You know what they say about men with giant, robotic hands, right?"

Felicia: "What do they say?"

Felicia: "Why do the women wear thongs? Like why can't we have a woman who doesn't wear thongs?"

Ryon: "What do you want her to wear? Like, sensible clothes, like Kathryn Conover dresses and stuff?"

Ryon, remaking on Felicia's sleeve tatts: "You look like you have jaundice."

Felicia: "Yeah, and the sad thing is it almost matches my skin."