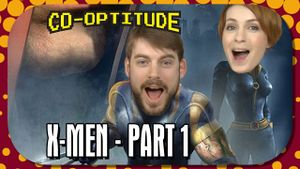 This is a two-part game play-through with part 2 in Episode 31.

The latter part of the episode features a fan favorite string of observations about Cyclops and Wolverine captured below in Quotes.

Felicia: "Have you read a lot of the comics?"

Ryon: "I used to watch the Saturday morning cartoon."

Felicia: "Okay, so you qualify."

Ryon: "Yup, that makes me a PhD in X-Men-ologoy. X-Person-ology."

Felicia: "How great would life be if there were real mutants?"

Ryon: "I'm thinking it'd be pretty good if you were one. But like I would feel so bad about myself if I were a normal. Well, I think I'd try to find anything unusual about myself and call it my mutant power. Like I'd be like, 'My fingernails grow a little faster than normal. I have the gene.'"

Felicia: "Oh, we can kill pots! I love this game so much!"

Ryon: "I wonder if Wolverine's claws ever extend without his conscious effort."

Felicia: "Like when he sees a really pretty girl?"

Ryon: "Exactly, like if he gets a claw boner."

Felicia: "You're going to play this character, and I'm gonna play Rogue or—"

Ryon, regarding huge foot prints on the ground: "Those clearly are not bare foot prints, right, so he clearly has boots. So where the fuck do you get boots like that?"

Felicia: "Yeah, three people at once is not good. [both laughing] Pro tip."

Ryon, during Mystique fight: "Wait, we gotta equip some shit."

Ryon: "But like Cyclops is just this kind of lawful good, uptight—"

Ryon: "—uptight, lawful good dude, and it's like 1 point into insufferable moralizing, you know?"

Felicia: "I know, it's just no fun. You don't wanna get him drunk in Vegas, that's all I gotta say."

Ryon: "'Xtraction Point'. I never get— See, it's possible to be a superhero and have a sense of humor too, you know what I mean? There's no reason you can't have a little fun."

Felicia: "Wolverine does have a sense of humor."

Ryon: "Cyclops listens to Prairie Home Companion and loves it."

Ryon: "He watches 60 Minutes every day."

Felicia: "He tries to be socially conscious."

Ryon: "He doesn't recycle or compost though. I get the feeling he's kind of a mid-level conservative. He drives a Prius, but […] it's for gas mileage, not because it's environmentally friendly."

Ryon: "Wolverine has 'Logan' in gothic letters on the rear window of his car."

Felicia: "Wolverine puts detail striping on his car, and people did it for free just because he's cool."

Ryon: "Brooks Brothers, but he only gets the polos."

Ryon: "Yeah, he wears Fruit of the Loom cottons, and he wears docksiders."

Felicia: "What about Wolverine? Wolverine's silk."

Ryon: "I think Cyclops has read all of Tom Clancy's novels and likes them all."

Ryon: "Cyclops has pleats on his khakis."

Ryon: "He wears Dockers, and his loafers have tassels."

Felicia: "Wolverine knows the guy who owns Ed Hardy and he—"

Felicia: "No irony! And he carries it off well. He's one of the few humans."

Ryon: "Wolverine is the guy who Ed Hardy was made for."

Ryon: "Cyclops would get a tattoo, but never in a publicly visible place."

Felicia: "He has a little tramp stamp with his mom's name on it."

Ryon: "Cyclops thinks that wearing Chuck Taylors is daring. When he buys sneakers they're pure just white sneakers. That's all he wears. He also wears cotton socks with his sneakers."

Ryon: "Wolverine has a chain wallet."

Ryon: "Cyclops goes to the barber, not the stylist."

Felicia: "Wolverine lets the girl he picked up last night cut his hair."

Felicia: "Wolverine has his own cologne custom made, and part of it is his own sweat."

Felicia: "'Danger Room Disc'? What is that?"

Ryon: "It's the new album, by Danger Room! That's too edgy for Cyclops though."

Ryon: "Except when he really wants to cut loose, then he listens to the Black Eyed Peas."

Felicia: "Wolverine's favorite band was just playing as the drummer in Iron Maiden."

Ryon: "When Iron Maiden sings Virus live it's Wolverine on the mic, not Bruce Dickinson. All you Iron Maiden fans know what I'm talking about."

Ryon: "If you had gotten superpowers when we were kids, I would not be alive today. Fact."

Felicia: "Really? What would you have done?"