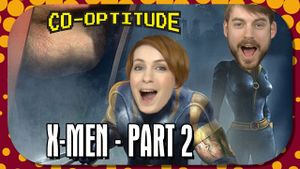 Ryon: "Get Iceman out of there. I hate that dude. I bet he makes a lot of water and cold based puns, which I really don't want to hear. Every time he kills somebody he's gonna say 'I put that guy on ice,' or, 'Stay cool, bro,' or, 'Chill out,' or something like that, and I don't think I can tolerate that."

Ryon: "Oh, not capoeira. No, get the breakdancing guy out of there. Just, just no. 'Thank you! Don't call us, we'll call you.'"

Felicia: "Do you like this team? Are you really committed to this team?"

Ryon: "It's fine. I just don't want Iceman and I don't want Beast to be breakdancing."

Felicia: "I just feel like he's got dance in his soul. Why would you want to repress it?"

Ryon: "I can't do it, alright? He should go to the subway and busk, okay? That's what he should do. He's too sensitive to make an effective warrior."

Felicia: "Does he ever get laid in the comics?"

Ryon: "Beast? You'd think with a name like that he would."

Felicia: "Rogue is kind of unimpressive here, I don't know."

Ryon: "Perfect hero for you then. Alright."

Ryon: "I bet Cyclops only uses Equal to sweeten beverages. That's it. Sugar's too high calorie—"

Felicia: "You know what I love, popsicles."

Ryon: "You should have played Iceman then, because I bet he makes a lot of popsicle jokes."

Felicia: "Yeah, that's his euphemism for a BJ."

Ryon: "That's his name for his penis."

Felicia, on loading screen showing Beast: "Look at that toenail. If you had a toe fetish that would be the last person you wanna date."

Felicia: "The ones with the plastic on each side that are not real cheese."

Ryon: "That way he doesn't actually have to touch the cheese to put it on his sammy."

Ryon: "I bet Rogue shops at Hot Topic though."

Felicia, after destroying a box they needed to climb over a box car: "Ohhhh!"

Ryon: "You dumb fucking piece of shit you. Is it good or bad to be that dumb, like does it feel different than people feel, or better? Is it like sleeping on really clean white sheets? Is that what it's like in your world every day?"

Storm, in game: "I feel as strong as a hurricane!"

Ryon: "That's insensitive to victims of Katrina. Especially Rogue would not appreciate that, you know, post-Katrina."

Ryon: "Professor Xavier's going to be really angry. He's like, 'You killed how many? How many people did you kill on a routine mission?'"

Felicia: "God, you're becoming like a professional X-Men Legends player."

Felicia: "It's like now we're in some league or something!"

Felicia: "What is your damage?"

Felicia: "Iceman, when he pees, is it solid?"

Felicia: "We're gonna finish this level, and then we're gonna be done, and everybody's gonna enjoy it, because obviously it was worth two parts to watch me die over and over and kill pretty much all the X-Men in succession."

Ryon: "A Wolverine accessory would be like 'Ed Hardy Shirt of Badassness.'"

Enemy in game: "You're going down."

Ryon: "Oh, come on. Is that what they train them to say in like guard school or something?"

Felicia: "What they do is […] a contest in the bad guy HQ, they're like 'Hey guys, we have an intercom system now, and the top ten badass lines we're gonna put on there when the alarms go off.'"

Ryon: "It's one of those team building exercises."