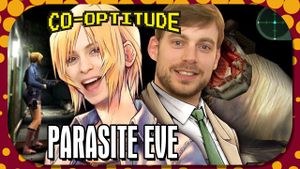 Felicia: "Well, it's Monday. Guess what day that is."

Felicia: "This is an action, role-playing, survival, horror video game. So that's like five things in one."

Felicia: "It's like a pizza/Chinese food/drug store kind of place, right?"

Ryon: "Yeah, it's like putting your Quaaludes in sesame chicken on top of a pizza crust and baking it."

Felicia: "Okay, I don't know what that— [laughing]"

Ryon: "And, again, here's the instruction manual; we're not gonna need that."

Felicia: "That's not her name!"

Felicia, reading man's dialog: "'Aren't you glad you decided to go out with me?' Not right now."

Ryon: "What kind of beta asks that shit? Like, that's the kind of question that makes her like say no."

Felicia: "It's never a video game until you rob a clown."

Ryon, seeing dressing room full of charred clowns: "Those, I would say, are sad clowns."

Felicia: "I really should have stolen that hat before they burned him, because it woulda looked cute on me!"

Ryon: "Are you hungry by any chance?"

Felicia: "Okay, go straight. I bet you can go in the Colosseum."

Ryon: "That's a painting! [laughing] Did you really say go into the Colosseum at Rome? I just want to clarify."

Felicia: "You're the worst."

Ryon: "Is that actually what you said? Oh wait, there's a big-ass door here."

Felicia: "That's a fucking prop. I hate this!"

Ryon: "I hate theaters! They always fool me with their wonderful looking things that are not [real]."

Ryon: "It grows inside rats and frogs, it's true."

Felicia: "I don't wanna hear about my mitochondria any more unless you have a pamphlet I can read. You know what I'm saying?"

Felicia, during cutscene: "Are you absorbing anything?"

Felicia: "There must be four-thousand lines of dialog in this game."

Felicia: "God, her pants are going up her crotch. Did you see that? Right there!"

Ryon, laughing: "It's like there's a black hole right there that's sucking all the—"

Felicia: "Her vagina is like a vacuum sucking it in!"

Ryon: "You're too old for this shit, Daniel. Just let me go."

Felicia: "What is that?"

Felicia: "That's a former homeless man. That is a really—"

Felicia, laughing: "That is true. I don't know, he could have gotten like a pied-à-terre."

Felicia: "Get the junk. You know you want junk."

Ryon, laughing: "Pushing a shopping cart around Central Park with all your junk in it."

Felicia: "something about mitochondria"