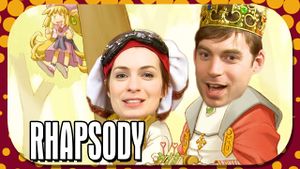 Felicia: "Do I hear a song starting?"

Felicia, singing: "I will be waiting patientlyyyy, until he comes."

Ryon: "Maybe this isn't so bad after all."

Ryon: "So basically this chick makes puppets and lives with her grampa?"

Felicia: "She talks with puppets. She's a puppeteer—"

Ryon: "She talks with her puppets, she lives with gramps, she's got nothing really going on, and so she wants to marry a prince."

Both burst out laughing

Ryon: "I'm liking this game more and more with every passing minute."

Felicia: "'My name's Sharte'? If you didn't know, that's the combination of a shit and a fart."

Ryon: "That's when you try and fart but a little bit of poop comes out too."

Ryon, as grampa: "'Bring me back some Red Inotium?'"

Ryon, after forcing Felicia to skip a song: "Oh, that's a shame. That's a shame! That's too bad."

Ryon: "This sounds like there's gonna be a musical intro to this fight."

Felicia: "I really hope so."

Ryon: "It's like Rumble Tonight from West Side Story, ya know? [singing] When you're a cat you're a cat all the way."

Ryon: "From your first litter box—"

Felicia: "To your last—"

Ryon: "To your ninth dying day."

Felicia: "Our prey is in our sights. We're gonna stalk this guy. Alright? That's what you do when you're really attracted to somebody."

Ryon: "We're gonna do some Fatal Attraction action in here."

Felicia, reading: "'You don't look really well. Oh, I almost forgot. Your face doesn't look so good to begin with.'"

Felicia, reading: "'Oh, I gotta get going. [I have to get fitted for my custom dress by] Kalvin Cline.'"

Ryon: "Like that's a knockoff brand you get in Chinatown or something. You don't brag about a Kalvin Cline. And then she's gonna get something by Lalph Rauran."

Ryon: "I'm gonna play some Kenny G for ya. That'll kill anybody."

Felicia: "This is all like a Lisa Frank notebook, this whole game."

Felicia: "You know what I would like? I would love to own a small, humanoid kitten. I don't know if that'd be slavery or not, but if I could get one of those—"

Ryon: "But you would basically own them. You would pretend that— When push came to shove, if it came up to you and said, 'Thanks, but I'm gonna take off,' you wouldn't let it, would you?"

Felicia: "You ruin everything! I just wanted to own one, and be able to have him talk and wear a tuxedo."

Felicia, singing as Cornet: "I love cooking so-o mu-uch! This fish will lure this man into my beeed!"

Ryon, singing as Cornet: "Maybe the Prince will like the taste of my fish! That musky flavor will give him some wooood!"

Felicia: "What are you doing? Are you tired of blonde women having men problems? And bitch problems?"

The puppet points at Felicia affirmatively

Ryon: "You got ninety-nine problems and a puppet ain't one."

Ryon: "We just climbed up through a latrine with the orange fish we cooked for the Prince."

Ryon, laughing: "They're both covered in shit. 'Here, my prince!'"

Felicia: "'Assassin'? You started molesting me in a bathroom for a fish!"

Felicia: "I wanna fight with this egg! Gonna kick some butt."

Ryon: "Nothing makes a better warrior than an egg."

Felicia: "I am gonna participate."

Felicia: "Whoa, this is a trick question!"

Felicia: "You aren't going to participate, right? I am gonna participate."

Ryon: "She's trying to trick us. So, no you're not going— No you aren't not going to participate."

Felicia: "Don't fuck me up. Is it yes or no? I do want to participate."

Ryon: "I think you say no I don't agree with that statement."

Felicia: "You are gonna participate."

Felicia, laughing: "I don't know! She's trying to trick me! Okay, I don't know, I think it's yes, I am gonna participate."

Felicia: "So this was a theater and now it's a barbecue joint."

Felicia: "'Cause the Prince is gonna be like, boner!"

Felicia, after being told to run an obstacle course before eating: "Why would you do that!?"

Ryon: "This business model is destined to fail! Like, 'Man, I sure am hungry. You know what I wanna do before I eat? Run a fucking obstacle course. Oh, that's why we had to sign a waiver before we came into the restaurant.'"

Ryon: "You know, I'm gonna give this guy a really bad Yelp review. That's all I gotta tell you. He's getting like 0 stars on Yelp. 'When we got there, it was dirty, and there was salt on the floor. And we got attacked by miscellaneous skeletons, monsters, jelly beans, cats, and wolves wearing aprons. The food was really cold, and the barbecue wasn't Texas style like they advertised. It tasted like cat and human of all things. Well, I'm certainly never going back here.'"

Ryon: "This puppet is a sick fuck, and I'm really liking it a lot. Like, this puppet and I are on the same mental wavelength. Just rub yourself with orange fish and wear a bear costume, and the Prince is gonna have a hard on that diamonds couldn't cut."

Felicia, singing: "My name is Cornet and I'm waiting for yooou."

Ryon, singing: "I tried to cook some fish for my hubby-boo."

Ryan Copple as puppet: "My name is Sharte. I like to fart!"