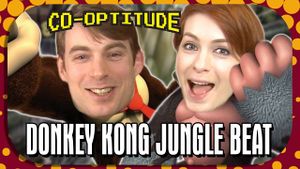 Ryon and Felicia together, then Felicia quickly resorting to mumbling along: "Hey, everybody! It's time for another episode of Co-Optitude where we're gonna prance like trained monkeys and orca killer whales for your amusement, and just like killer whales, you're gonna abuse us in captivity and we'll have to do it again and again and again forever."

Ryon, reading back of box: "'If you have epilepsy or have had seizures or other unusual reactions to flashing lights or patterns, consult a doctor before playing video games.' Co-Optitude, starring Ryon Day, will not be held responsible for any injuries incurred watching this video."

Felicia: "You're gonna take this and you're gonna adapt it for every game you've ever played. [smacking bongo] Jump jump jump!"

Felicia: "[This game] was the 95th best game made on the Nintendo Power's top 200 games list."

Ryon: "So it was in the 50th percentile, more or less. Sweet, we're playing the most average game that was released that year!"

Felicia: "You're playing it like Carlos Santana! Who's not a drummer. I know that."

Ryon: "Donkey Kong wants no other animals to be alive in the fucking jungle except monkeys."

Felicia: "Do we look dumb?"

Ryon: "No. This is the most dignified possible way to play computer games."

Ryon: "Donkey Kong, how many bananas is enough exactly?"

Ryon: "Donkey Kong is just really— Nothing is gonna be alive in the rain forest by the time this dude's done. The only things that are gonna be left in the world are Donkey Kong and bananas."

Ryon: "I'll bet that his shit is yellow. What do you think?"

Felicia: "No, I did a Cheetos commercial one time where I had to eat seven bags of Cheetos — I am not kidding — within a five-hour span. I did not later poop a Cheeto. It was just a normal poo."

Felicia, after Ryon defeats a boss gorilla: "He was the father of four or five children."

Ryon: "Now his mom's gonna have to eat the pups. Oh well."

Ryon: "Alright, what horrible thing are we gonna do now? We're gonna distribute smallpox blankets I think. That's what we're gonna do next."

Ryon, laughing: "Well, I'm sure that we'll have a story like that in this game before the game's over."

Ryon: "So these little guys drop bananas when they die, which means they've actually been stealing bananas from Donkey Kong's supply. That's why they must die."

Felicia, beating enemy: "Gimme 'em! Gimme all of them! I'll beat the shit out of you!"

Felicia, after Ryon beats boss: "That guy had fifteen children, and he had a soup kitchen for homeless monkeys."

Felicia: "Throw everything into his heart. That's the time you were left by your first girlfriend in college."

Ryon: "Donna Kong? That's what my heart felt like when you left me! It felt like you had exploding pineapples in my heart!"

Ryon: "He delivers unto me the instruments of his own destruction."