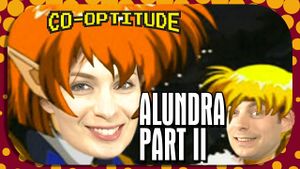 This is part 2 of a two-part playthrough. Part 2 is Episode 37. They decided to do a two-parter because the game ended without saving, and they wanted to see more of it.

Ryon: "That's what you get for picking up sailors in front of Home Depot, okay. You just don't do it. Don't do it."

Ryon: "So in our last exciting episode—"

Felicia: "—we were trapped in Jess's house."

Both singing to tune of Jessie's Girl: "We were- Jess's house! Da-da-da-da-da."

Felicia: "Try to blow that up. That looks blowable."

Felicia, about monkeys swarmed around Lyman: "What are they doing? Are they pleasuring him or torturing him? I can't tell."

Ryon, while riding mine cart: "Stop this crazy thing!"

Felicia: "Put the bomb in the actual right place. You can bomb that cottage cheese out of the way. It's a cauliflower head."

Felicia: "Can I get through here?"

Felicia: "No, I don't want to go back! Just— Just climb! Just climb! Alundra, you can do it! It's not even that high!"

Ryon: "His clown shoes can't get purchase. He's not a boulderer obviously."

Ryon, in child's voice: "Mommy, can we go on the mine cart ride again? That was fun!"

Felicia, as mother: "What about the fucking teacup?"

Felicia, entering mine cart with enemies on the tracks: "Watch this."

Ryon, regarding Billy Zane: "Was Titanic his high-water mark?"

Ryon, as Alundra gets out of mine cart: "Alright, Alundra. Did you have fun buddy? Let's get back in line. Get on the ride again. Whee!"

Felicia: "It's like when little kids wanna do the same thing over and over. 'You wanna be swung up again? Wow, okay.'"

Felicia, laughing: "I want us to Photoshop a picture of huge, giant Billy Zane throwing adult you up."

Felicia: "Why is it so good? You know why we've been liking it so much this session? Because we haven't interacted with any townsperson."

Felicia: "I'd like to buy some things, with— [singing] I'm gonna get some herbs."

Ryan Copple: "In the mean time, I would stop mowing things."

Ryon: "But we got stuff. It was for a purpose. Everything happens for a reason, RyCo."

Ryon, reading Jess's dialog: "'Take the flowers to [Olen]—' Is he trying to set us up on a date?"

Ryon, laughing: "So you are supposed to shit there."

Ryon: "Did you know that if Saint Blue and Saint Red they give birth to Saint Purple?"

Felicia: "Alright, well I wanna watch that after we finish this puzzle."

Felicia: "I think Brown is on the bottom, because it's a little shitty color."

Felicia: "3 clingy villagers' thumbs up out of 3"