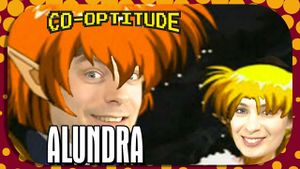 Both reading in exaggerated pirate accent: "'Yarr, what ya be wantin', boy? Have ya forgotten where yer cabin is again?'"

Ryon: "That means this dude has been wandering around the ship like several times a day. 'Where's my cabin?'"

Ryon: "Is that Foghorn Leghorn as a sailor now?"

Felicia: "Pirates are just homoerotic. I'm sorry, piracy is just— It is! It's like hot men on a ship together. There's nothing better than that."

Ryon: "If there's anything that needs to be fixed on a boat it'd be a crack in the wall."

Felicia: "Yeah, there should be a rush."

Felicia: "I'm gonna say that the blasé attitude, that's like a D-grade pirate."

Felicia, as Alundra pulsates in bed: "What are you doing down there. Why are you pulsating?"

Ryon: "You don't wanna know. Let's say just because that pirate heard me screaming in my sleep, it is not because I was having a bad dream."

Ryon, as dream sequence starts: "You're late for class and you're not wearing pants! You haven't been to this class all semester!"

Felicia: "You look dead. This might be the end of the game."

Ryon, about Jess: "Look at his lips. He's all like gonna [makes kissing noises]"

Felicia, reading dialog: "Okay. There's a lot of talking. I'd just like to kill a couple people."

Felicia, trying to interact with character in a bed: "Well, this isn't working. Can I get in bed with him, just give him one last—"

Ryon, opening chest with "Herbs" inside: "Oh sweet! I got some sticky icky. 'Herbs obtained.' Yeah."

Ryon, reading dialog: "'Do you feel the flow?' Feel my funky flow? Alright. He's gonna do a rap battle now."

Ryon: "What kind of stupid old man puts like moving platforms with switches in his dreams? That's all I gotta say. It's your own fault, Wendell. If you dreamed like a square room then you'd be all good."

Felicia: "Can you go rescue the old guy?"

Ryon: "Look, I'm just doing this dream puzzle, alright? Maybe if he didn't dream in puzzles I would be able to do something right, but nooo. Old Wendell's gotta be a tricky old man."

Ryon, delivering final blow to slime: "There we go. Okay. Oh, what? Oh no."

Felicia: "Wendell's fine. This is his dream."

Ryon: "Oh yeah, Wendell's invincible. Yeah, in his dream. Wendell was never in any danger whatsoever. Wendell, you're the most tedious old man."

Felicia: "I mean, he could be stopping something with that cane."

Both reading: "'He's not moaning anymore.'"

Ryon, laughing: "I don't know what you did, but you sure finished him off!"

Felicia, reading: "'When you entered Wendell's dream, the body went slack.' Well, that's a problem that old men sometimes have."

Felicia, as we are given another crisis to solve: "God, I guess I'll just go—"

Felicia: "Does anybody ask where I wanna sleep or maybe if I have to piss?"

Felicia: "Why is everyone blonde and male in this game!? Look at his chin. He's not Japanese, but he's got blue-black hair. Yeah, black-blue hair. You know where they put all the people with dark hair? In the mine."

Zane's dialog: "You can remember that, can't you? Or is that too difficult for your tiny elf brain?"

Felicia: "God, what a racist muttonchopped fucking piece of shit."

Ryon: "We're getting nothing out of this deal, you know that?"

Felicia: "No, we're getting nothing except racism."

Jess's dialog: "One way or the other, I'm going to keep you alive through this…"

Felicia, regarding Jess being overprotective: "God, this guy is an overb— Listen, it was just one date from Grindr, okay? Jess. Jesus. It doesn't mean anything!"

Felicia: "We haven't even met a portion of the people who live in this game. They're all fucked up."

Ryon: "I can't wait to find out what passive-aggressive, co-dependent, messed up people—"

Felicia: "Yeah, demands on our time are gonna be here in this little village."