Felicia and Ryon play Harry Potter and the Goblet of Fire. 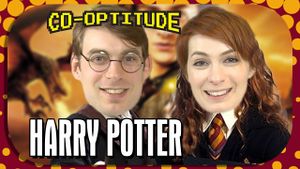 Ryon: "So, tell me something. Why the fuck are you dressed like you're at a Gryffindor slumber party? What, did you go to like Spencer's or Hot Topic or something and get—"

Felicia: "It is, indeed, a Hot Topic shirt."

Ryon: "If I have to fucking do this shit, then you should have to do it, too. Shithead-o change-o!"

Felicia: "Okay, is this good enough for you?"

Ryon: "I mean, you're wearing an infant's tie. I mean, like this is the tie they wore in the movie as kids I think."

Ryon: "So I think that J. K. Rowling should write another series of books like thirty years later. Like after—"

Felicia: "Well, she needs to write about the affair where Hermione and Harry meet in Italy."

Felicia: "Question: what are these mushrooms on the ground for? I need all mushrooms."

Ryon: "They're for a little bit of a journey that we can take."

Felicia: "Together. Me and—"

Ryon: "Me and Hermione."

Felicia: "Ron, just watch our bodies while we trip balls."

Ryon, reading prompt: "'Collect blue beans.' I'll tell you what Harry's got: blue balls. And there's only one cure: Hermione."

Felicia: "I'm gonna play Ron. I actually have his hair. [to camera] Hey! I beat you to it, internet!"

Felicia: "I always felt sorry for Hermione as the years went by because her boobs— You know that awkward teen boob thing. Like, you know you're wearing a training bra but you shouldn't."

Felicia: "If you were at Harry Potter-ville—"

Felicia: "Yes, okay, exactly. If you were at Hogwarts studying, what would your emphasis have been?"

Ryon: "It's fourth year. It's actually a graduate course."

Felicia: "I would wanna meet J. K. Rowling and Oprah, and we'd have tea together and maybe go to a spa. Maybe sit around a span naked, but not look below the neck, 'cause we're friends!"

Felicia: "Get everything. Buy it all."

Ryon: "Harry needs to last longer, according to Jenny."

Voiceover: "Now, to put the fires out you'll need to use aqua erupto."

Ryon: "Hermione! What are you doing? Hermione is running the show, obviously. Look at her. Her water spurt is the biggest. She's gushin'."

Felicia, laughing: "You're so gross."

Ryon: "Alright, next room. Wait, are there any beans in here?"

Felicia: "I don't care if you get beans or not."

Felicia: "The beans are done."

Felicia, laughing: "No! Please, stop it."

Ryon: "Can we compromise?"

Felicia, laughing: "It's either get beans or don't get beans."

Ryon: "Exactly, so the compromise is I get beans. That's how this works."

Felicia: "Wow, you know what? This is the incident where Hermione was like, 'I'll just fuck Ron for the rest of my life.'"

Ryon: "You know, [tending dragons is] not as glamorous as it sounds."

Ryon: "One thing that startles me about Hogwarts is I just can't even imagine how many young wizards died there, right? It's like hush-hush."

Ryon: "But it's always like a 'swimming accident' or something like that. It was tragic, like they went swimming without supervision and it was their fault."

Felicia: "Hagrid tends to the little special garden in the forest outside of Hogwarts."

Ryon: "The trees grow with particular vigor in Hagrid's garden."

Felicia: "What house would Macaulay Culkin be sorted into? Let's talk about other child—"

Ryon: "Beaver's a muggle. He was totally a muggle."

Ryon: "All of That 70s Show kids are totally Hufflepuff."

Felicia: "I think Grace Helbig would be Hufflepuff, but she would be like the queen of the Hufflepuffs. Freddie Wong: Slytherin all the way. I just think he'd be Slytherin! He's kinda like you. He's like, fuck."

Ryon: "What about Sean Plott?"

Felicia: "Really? No, she might be Ravenclaw. Nika Harper: Gryffindor."

Ryon: "Jeff Lewis? He needs his own house. Like, you can't even— Like, he needs a whole other fucking house."

Ryon, singing as they extinguish flames: "We didn't start the fire."

Felicia, singing: "It was only burning in the Forbidden Forest."

Felicia: "Hermione, do anything, please. You're a pretty girl."

Prompt: "Jinx Skrewt from the behind"

Felicia, reading: "'Jinx Skrewt'!? That might be the best sentence I've ever read in a video game."

Ryon, laughing: "Jinx Skrewt from behind."

Ryon: "This operation is sort of like getting semen from an elephant. It requires a lot of prostate stimulation to kill a Skrewt from behind."

Felicia: "4 wands up a Skrewt Jinx"

Ryon: "4 wands up a Skrewt from behind"