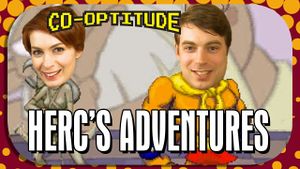 Ryon: "I don't see us being very heroic right now. That's all I gotta tell ya."

Felicia: "Well, we just killed a cyclops, we've killed a bunch of—"

Ryon: "We're killing all of the sheep."

Felicia, looking at Herc's top-heavy proportions: "Jesus. God, you have tiny— Your dick is like a fucking thumbnail. You get smaller as you go down."

Felicia: "If you were a Greek god, which one would you wanna be?"

Ryon: "Oh god, I don't know, man. I mean, Zeus ran the joint, right? And then there was that mellow guy who was the volcano god who just sat around making weapons all the time."

Felicia: "Oh, that was Hephaestus, yeah."

Ryon: "Or Vulcan if you're into the Romans."

Felicia: "I'm sorry, I kinda wanna be Aphrodite. I mean, I would say Artemis and you go out and shoot things. I wouldn't want to kill any animals."

Ryon: "Aphrodite is like the Kim Kardashian of Greek mythology."

Felicia: "She kinda is."

Ryon: "In ancient Greece, it would have been like, 'Have you see that new Aphrodite sex tape?' And then she would have made a career for herself all of a sudden."

Felicia: "Well also, I really would want to kill a skeleton in real life. You know how satisfying that crunch would be? Crunch."

Ryon: "In what other game can you think of can you throw houses at skeletons?"

Ryon: "The hardest enemy in the game is a starving villager."

Felicia: "Why's she got a gun!? What kind of anachronistic bullshit is that?"

Ryon: "This is not authentic."

Ryon, impersonating Atlanta: "'Ouch!' She says ouch kinda like she likes it."

Felicia: "Yeah. Well, she is a virgin goddess."

Felicia: "You know what I don't understand? What did they wear for underwear back then?"

Ryon: "I think they all free-balled it."

Ryon: "Something tells me she's a total B."

Felicia: "What, Hera? Well, Zeus fucked around on her a lot, and I would be a B too."

Felicia: "Whatever the fuck that word is."

Ryon, reading: "'You must be dead too.' He's trying to pick you up. He's gonna neg you next. He's like, 'You call that bow shooting?'"

Ryon: "This is the biggest train wreck of a game that we've ever played before. I pronounce this game—"

Felicia, laughing: "I hate it! I went from loving this game so much to I'm hating life!"

Felicia: "I'm so angry right now. If you gave me a kitten I'd be like fuck off, kitten!"

Ryon: "Is this worse than Guts? Do you think this is as bad as Guts?"

Ryon: "Guts still has the crown."

Ryon: "Now Hercules doesn't have that baggage to haul around. He's gonna get some work done."

Ryon: "This is actually the Greek myth of Sisyphus we're playing through I think."

Felicia: "We want to make a parable. A video game parable of Sisyphus."

Felicia: "Listen, sometimes we hate games because we're not good at them. This one with the whole 'Oh, you're dead? Here, let me stick some more fingers up your butt.' The mechanic of resurrecting you and making you fight through the death zone—"

Felicia: "—just to use another life, because you don't have quite enough health to survive much farther after you get through the Hades area."

This is another one of those episodes that's interesting from a video game history perspective as well as for the entertainment value. Sometimes the only way to know something doesn't work is to try it, which this game does with its death mechanics. The concept of ratcheting up the punishment each time you die until you run out of continues sounds interesting on paper, but clearly it makes for a punishing game that becomes more and more unenjoyable the longer you play it. Each death puts you farther back in the underworld, which makes you fight through more enemies to escape, which leaves you with less health when you make it out. Given that you are usually further along in the game each time you die, you're returning to a tougher part of the game than your last death with less health than your last death, virtually guaranteeing an ever-diminishing lifespan for your player until you run out of continues. Contrast this to many modern games that adjust the difficulty to become easier when it senses you are struggling.