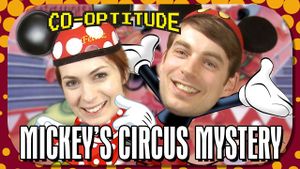 Felicia, reading about game: "'The costumes include a sweeper. You can suck enemies and turn 'em into coins—'"

Felicia: "Yeah. Only Minnie can wear that."

Felicia: "I would pray that this is a better game than the Chip 'n Dale one, 'cause that was torturous."

Ryon: "I'm looking forward to rubbing some mouse glands on things that people put in their mouths."

Ryon, as Goofy enters cutscene: "Oh god, this fucking loser? Oh look at him. This motherfucker.

Ryon: "Wow. Goofy's like on a quest of self discovery."

Felicia: "He's going off into his own endless Eternal Sunshine of the Spotless Mind movie, and we're about to go to the circus."

Ryon, about Minnie: "Oh, look at that coquettish little pose she's got. That come-hither look."

Ryon, laughing: "I didn't know that was a rule to live by."

Felicia: "That's how we get the money bucks."

Ryon: "When you suck people off you get money. That's what I learned from this game."

Ryon, seeing Goofy on continue screen: "Oh god, him? That's the last thing that you see before you [die]."

Felicia: "Hopefully this game is made for babies and you can just continue forever."

Felicia: "If you could kill somebody and vacuum them up and turn 'em into like a hundred bucks, what would you do?"

Ryon: "Oh, there wouldn't be very many people in the world, that's for sure."

Felicia: "Do you know what I hate? Jolly Green Giant. They never fill out his backstory enough to figure out why—"

Felicia: "Can you make a mouth fart sound?"

Ryon: "What the fuck are you talking about?"

Felicia: "You know that thing where you can make a fart sound with your mouth?"

Ryon: "Golly, Felicia, I am having those mid-day energy doldrums."

Felicia: "Well you know the thing we can do at Co-Optitude when we get a little low energy—"

Felicia: "We send someone out to Jamba Juice."

Ryon: "The carbohydrates really give me the energy, and the protein boost really helps me pack on that muscle on the guns."

Felicia: "And honestly, they didn't pay us to say this."

Felicia: "Well, now that I said it like that it did sound like we were paid to say this."

Felicia: "If you were forced to die or marry Goofy in a conjugal relationship—"

Ryon: "Ugh, god. I would seriously just take my own life. That would be a Shakespearean tragedy, man."

Ryon, seeing Clarabelle Cow: "Who is that!? It's like a Goofy—"

Ryon: "You know this shit?"

Ryon: "Wow, look at this. He's got a painting— Who has a painting of themself hanging over his fireplace?"

Felicia: "I have a lot of paintings of myself, but not over my fireplace."

Ryon: "You're a douchebag."

Felicia: "I would recommend this if you're a baby and you wanna game, or if you're a normal human who likes to watch Minnie undress and dress."

Ryon, about his personalized Mickey hat: "I'll be sportin' this wherever I go."

Ryon: "Yeah, wherever I go. Out to the cluuub."

There isn't any official bonus content for this video hosted by Geek & Sundry, however Felicia posted some extra footage on her own YouTube channel of her and her brother making fart noises with their mouths. In the intro to this clip, she explains it was decided it was "too gross and not polite enough" and was not posted on the website.