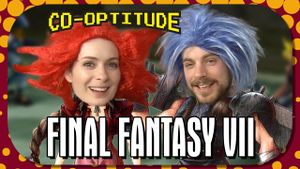 This is part two of what was intended as a two-part play through, however in the introduction Felicia and Ryon explain that part one was lost due to technical issues, but that they decided to post part two by itself.

Felicia: "You're gonna notice a couple things that you might feel out of the loop on. One: we're wearing things on our head that might feel startling if you look at 'em. And number two: we customized the names of our characters. We got a lot of heartfelt joy."

Ryon: "That's right, as usual. Yeah, and a thought towards the theme of the game, the place of the game in the pantheon of computer gaming and video gaming, and so we hope that the names we gave them have the proper gravitas and respect for the medium and for the game."

Felicia: "Everything's going so far as planned, except we had—"

Ryon: "They had to jump off a fucking train."

Ryon: "God, I'm fucking itchy. I have lice or something in this wig. Sean! Nobody with lice better have worn this wig before I did! If I have to shave my head, god help you!"

Ryon: "Unh, unh, 15 points? Come on, you're not pulling your weight, girl. Can we get her a weapon or something? This is really sad."

Ryon: "She fists enemies? Is that what you're saying?"

Felicia: "Well, she punches them, yes!"

Felicia: "I always name mine after food."

Ryon: "My gnome warrior was named Morsel. And then my gnome rogue was named Zippy. And then in Card Hunter I have all dwarves, but the point is that I named them Muffins, Crumpets, and Biscuits. Yours was named Fahrvergnügen?"

Felicia: "Mine are named Fahrvergnügen, Schadenfreude, and Gewürztraminer or something like that."

Felicia, reading: "'That's one damn tiny hole.' That's what he said! It's called a urethra, where your man gravy comes from."

Felicia: "Did you ever see the Zooey Deschanel cotton ad?"

Felicia: "I can't condemn anybody for being quirky, so I'll just stay silent."

Felicia: "She was singin'. It was very Instagram filtered."

Ryon: "What would it really be like to date a girl like that? It would be maddening. Utterly fucking maddening."

Felicia: "God, why did her boobs get so much bigger? 'Cause she limit breaked. Pfppbt! [gestures her boobs popping out]"

Felicia: "Can you concentrate your fire, please? Am I backseat driving enough?"

Ryon: "Yeah, you didn't have it blown yet. You're blowing the reactor. Don't pull out before you blow the reactor."

Felicia: "Am I in the wrong place though? Did I take a left turn and I'm just like—"

Ryon: "Yeah, you got off at the wrong subway stop to your bombing."

Felicia, as characters split out for a scripted sequence: "Taintiez and Poopy came out of my Anuss."

Ryon: "You mean we were all tipsy on soju at the Korean barbecue place with a built-in stove built into the fucking table. There's like a— So you go to the restaurant and pay people so you can cook your food. And then get really drunk and start making jokes about cooking with gas, which is what you're literally actually doing."

Ryon: "Guess what I'm gonna do. I'm gonna save it over another save. Yeah."

Felicia: "No! We need every single save! We need—"

Felicia: "God damn you. God damn you! I never save over another save. It's always new saves! Who else— Okay, no, Wil Wheaton told me he only ever has one save. I was like, 'What if you mess up? What if you mess up?' He's like, 'I mess up.' [brightly to camera] What kind of save person are you? Leave it in the comments!"

Felicia: "No, no, reveal your vulnerability. This is a turning point."

Ryon: "Strong silent type? This a turning point. That's right. Part of my therapy is to be more vulnerable with my friends."

Barret's dialog: "Don't go cryin' like a woman. There ain't nothin' I can do for ya. Ya gotta do it yourself."

Ryon: "I tried to reveal my vulnerability and he did not validate me."

Aeris's dialog: "Say, I feel like talking. Do you feel up to it?"

Ryon: "Oh god, I don't wanna. She hasn't even slept with me yet, and already she wants to talk? God, already codependent. Jesus, get away from me. 'Can we talk about us?' Baby, there is no 'us.'"

Felicia: "This is the end of the segment. We couldn't end at a better place. But you gotta name her! Oh god. Just end it! You'll never know what we named her! BYE!"

Felicia: "What do we name her? Well, we have Anuss, Taintiez, and Poopy. We could do something with urine or vagina. Lady Tunnel?"

Felicia: "J-A-E, because she's from the south."

Ryon, laughing: "We really need class! We need to class it up!"