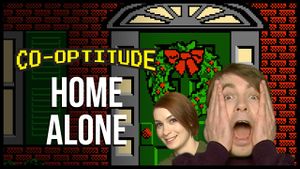 Ryon: "Guess what holiday we are celebrating."

Felicia: "We are celebrating—"

Ryon: "NO specific holiday, because we want to be inclusive here on Co-Optitude."

Felicia: "Okay, no, actually, this is about Christmas, but—"

Ryon: "We need to put a black bar over 'merry Christmas' on your sweater."

Felicia: "But to honor everyone's celebration we are playing a Christmas game. [laughs] That's not right, is it?"

Ryon, singing to tune of Up on the Housetop: "Up in the Sega, cartridge falls. Turn it on and we'll play some."

Felicia, laughing: "It was good until then."

Felicia, singing to tune of Away in a Manger: "Away in the Sega is Home Alone. It's a single-player game, but we're playing it anyway, because the pickings on Christmas games are low, so you'll get what you get and you can't return it for a refund."

Felicia, setting traps in a house: "God, I'm a murderer!"

Ryon: "No, go back to the furnace, dude. I'm gonna worship this thing. 'Speak to me, master! What does Beelzebub have to say? Baalzebul the Radiator.'"

Felicia: "I like to burn people, so just burn as much as you can."

Felicia: "Okay, maybe you can murder them."

Felicia: "Maybe you can murder them."

Ryon: "Look at the stove though. Like, that's like they're on the frontier. An 1800s frontier house."

Felicia: "We're not on open house weekend! We need to go!"

Ryon: "You keep telling me I need to get decoration ideas, and where better than a '90s video game?"

Ryon: "God, look at his walk though. He looks like he's got a poopy in his pants. Look."

Felicia: "Wait, why is there a pain bar?"

Ryon: "'How do you get to the bathroom?' 'Just go up four flights of stairs and it's the last room on the right. Hope you can make it.'"

Ryon, after getting captured: "Oh no! What!?"

Felicia: "Oh god, your carcass is on the wall!"

Felicia: "It's actually, you're not dead, it's just your brainstem."

Ryon: "Oh god, a tire. I just shit tires. It's my only superpower is shitting tires."

Felicia: "When I was about 4-years-old, I knew that we didn't have any money. And I also discovered by snooping in my mom's closet that there was no Santa. Because I saw gifts up on the top shelf, and I was like, that's suspicious. Why are there gifts? So in order to test the theory that there was no Santa, I decided to request the one item that I could see on the top, top shelf. And I said, 'I really want an A.G. Bear for Christmas, Mom.' And she's like, 'What?', because she bought it for Ryon. But I got—"

Ryon: "Oh shit, dude. You got my Christmas present for Christmas, didn't you?"

Felicia: "Yeah, and it was the worst Christmas because I hated this bear. It was so stupid. And I discovered there was no Santa."

Felicia: "It was an awful Christmas. So that was the one that was most traumatic."

Ryon: "That's like the biggest TV. Look at this."

Felicia: "And nothing to sit on."

Ryon: "Okay, so what is this. Balloons, a bong, and a crossbow? God. Why not just the crossbow? Autoassemble. Oh, we got so many traps, dude. 'Super ball launcher'? You made something more useless out of a crossbow. You had a crossbow, and you made something that cannot hurt anybody. 'You know what I'm gonna do with this deadly weapon? I'm gonna make something stupid out of it.'"

Ryon: "No, man, I'm coming for them. The upper hand is on the other foot."

Ryon: "Thanks guys for tuning in. Happy holidays, seasons greetings, and blessed be."