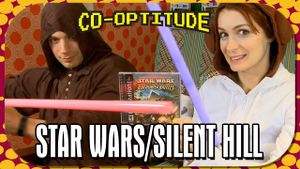 Felicia: "What game are we playing this week?"

Ryon: "Come on, Liam Neesons! Fuck 'em up like you fucked the wolves up. Come on."

Felicia: "Do you think George Lucas personally was like, 'I designed and approve this'?"

Ryon: "No, he wasn't, because this is actually kind of good."

Both still in Star Wars costumes and holding light sabers

Felicia: "We are playing—"

Felicia: "Been looking forward to this all week! Let's learn about the game. It's a horror game."

Ryon: "Um, you must be referring to navigating the real-time rendered environments."

Ryon: "—or is that a ticker tape parade for you, welcoming you to town?"

Felicia: "It looks like someone's scratching their head in heaven. I said that earlier, and you didn't hear my joke."

Felicia: "CHERYL! Get your fucking shit out here."

Ryon: "Is this an entire town of garages?"

Felicia, finding large pool of blood: "Oh god! Cheryl. She's on her period. [laughing] I'm sorry! I had to say it!"

Ryon: "Oh! These controls are the worst controls!"

Ryon: "What is this, an outdoor hospital or something? It's like Dr. Nick's surgery room."

Felicia, as monsters attack: "Oh god! Oh god! What are you doing? They're going down on you!"

Felicia: "Why would you go here for a vacation? Did it have the dismembered bodies on the fucking brochure site?"

Felicia: "Where did you find my body? Did you find two naked mole rat humans eating my crotch out?"

Ryon: "Be careful. It's dandruffing really hard out there."

Ryon: "Gun safety 101: you just point it all over the fucking room. This guy does not need a gun."

Felicia: "Alright, pick everything up in here, because, honestly, we need ketchup."

Felicia: "What the fuck. Was that a pterodactyl?"

Felicia: "This is Jurassic… Silent… Park."

Felicia: "There's so much dandruff in this town. You know you shed about fifty pounds a year of human skin?"

Ryon: "You just made that number up completely."

Ryon: "It's a completely fabricated number."

Felicia: "God, this is a land-bound place. You do not want to have fish and fries."

Ryon, laughing: "That's gotta be the worst restaurant in town. Look at this. 'Should we go to the Fish n Fries?'"

Felicia: "Never go to a place without windows to eat anything. That's just my life philosophy."

Felicia: "What do you think Princess Leia's favorite snack was?"

Character, looking at sign saying "to school": "Hmm, she's at the school."

Felicia: "Alright, you guys! That was a really fun game!"

Felicia: "And we wish we could play the whole thing."

Ryon: "We sure do. Unfortunately—"

Felicia: "But it's been a day of things."

Felicia: "God. Gotta go to— [looking at bare wrist] Look at the time."