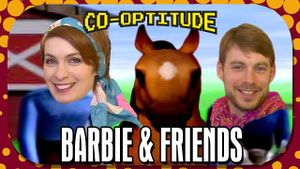 Ryon: "Oh, this is going to be so good. This looks like an episode of Robot Chicken. It's like Optimus Prime is gonna come around."

Ryon, as Barbie: "'Ranch dressing is all I eat, along with ice cubes and iceberg lettuce. We have to find the ranch dressing.'"

Felicia, looking at the game settings: "'Parental settings'? Is this for nudity??"

Ryon: "Is that under the parental options?"

Felicia: "YES!! It's under the parental options to have—! We gotta turn vibrating—"

Barbie, in game: "Ha ha, she loves to give me kisses, and she really likes to jump!"

Felicia: "I don't trust her voice when she did that little giggle."

Ryon: "Also, these are the same names in the stripper simulator. 'What do you want to name your stripper?'"

Ryon, as Barbie: "'Looks like the grave stones of small children!'"

Felicia: "Well, can I go in the cave? Could I explore? No, you gotta stay on the straight and narrow, little girl. Don't explore! Don't have any freedom! We're gonna give you a perception of freedom and free will, but really you should do what your parents say."

Felicia: "Just tell me where to go, guys."

Off-camera: "There's dots on the ground!!"

Off-camera: "Where there are dots on the ground."

Ryon: "There's really no other way to put it more clearly than 'there's dots on the ground.'"

Ryon: "Why are you swerving at the last second? Your horse is like, 'Uh-UH, bitch! Ain't all the carrots in the world gonna make me jump over that motherfucker."

Felicia: "Guys, if there are other games you would like us to play in the future—"

Felicia: "Any horse-related games that you would recommend that would further Ryon's pleasure of jumping through, ya know, gates and shit—"

Ryon: "Or any other stars of Full House that made video games—"

Felicia: "If there is a John Stamos video game—"

Ryon: "Ooh. Yeah, leave it in the comments."

Felicia: "I wanna play that."