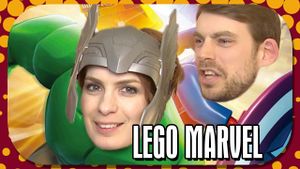 Felicia: "I gave you yours for Christmas."

Ryon: "Oh, aren't you a fucking saint? What do you have to act so sanctimonious in front of the camera for?"

Felicia: "I just want credit for giving you a really good Christmas gift!"

Ryon: "The good thing about playing a new game that not everybody has is that they don't know if we're full of shit yet if we don't like it."

Felicia: "It's true. If we're totally incompetent they might think, oh, that's just how the game is."

Ryon: "And yet, we might be totally incompetent and yet better than many of you who have not played it yet."

Felicia: "Yeah! We are better than you because you never experienced it, so we're incrementally better just from the experience of it."

Ryon: "How do you miss somebody with a bus?"

Felicia, as Hulk: "Hulk no know what to do. Hulk just dance. [singing] The hills are alive with the sound of music."

Ryon: "Oh, Nick Fury got a Jamba Juice of his own."

Ryon: "I'll bet that the exposed stud on the top of their head is an erogenous zone. What do you think?"

Felicia, laughing: "You just stroke it."

Ryon: "Like he rocks out with his stud out."

Felicia: "Well no, I bet they have an appliance that you can like go—"

Ryon: "I'll bet that the ladies really like Mr. Fantastic."

Felicia: "Look at me with my grotesque limbs! It just— It really bothers me, guys."

Felicia: "Okay, I just ruined all the computers, so you got nothing to work on anymore, guys. Are we supposed to be doing this?"

Ryon: "No, the carrier's going to go down in flames relatively soon."

Felicia, continuing to destroy computers: "Aren't these our friends? Why are they allowing us to ruin everything?"

Ryon, watching Mr. Fantastic turn into giant bolt cutters: "What? What are you doing? WHAT? No."

Felicia: "No, I hate him. I hate what I just did. It feels like I violated the world."

Ryon: "Hold X. Are you really that dumb, or are you acting for the show? Because I think you're serious about being that dumb."

Ryon: "Okay, you're Captain America, and you have a shield."

Ryon: "Get away, dumb character!"

Felicia: "God, I could play this game forever."

Ryon: "It's really good, except for you."

Felicia: "If I was alone it would be fine."

Ryon: "The worst part about this game is you."

Felicia: "What are you gonna be?"

Ryon: "What does a Lego man's keyboard look like?"

Felicia, watching Spider-man put on his mask: "He just put a new head on. Did you see that? It wasn't a mask. It was the head."

Ryon: "Boy, if we could do that everyone would look like young Brad Pitt though, so—"

Felicia, laughing: "If everyone could transplant their heads, they'd all look like Angelina Jolie and young Brad Pitt."

Ryon: "There would be so many Brangelinas."

Felicia, seeing Black Widow: "She just pencils in a waist there. I'm gonna wear a shirt like that!"

Ryon: "Like a Dremel? A Lego plastic surgeon has a Dremel tool."

Felicia: "What does Black Widow do?"

Ryon: "Nothing. She just sits there and looks fiiine."

Felicia: "God, my suit is already latex. It doesn't need more goo on it, alright?"

Felicia: "You can't be scared with a Lego— There's no Lego horror movie. Like, Lego Resident Evil would not be that scary."

Felicia: "Venom, you have some issues, honey."