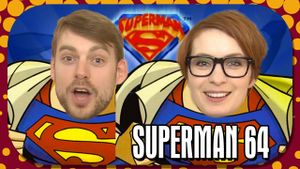 Felicia: "We've had so much of the cynicism. Let's cleanse the world with a little bit of earnestness."

Felicia: "Dark Knight. It's over."

Ryon: "—you know, post-modernist, nihilistic super heroes. What happened to the finest that humanity can become, and this is the answer right here. So let us play this gentleman, this noble cartridge."

Ryon: "Oh, okay, I have to be at a stop before I can punch. That's the thing. Safety first."

Felicia: "Can you freeze now? Try it."

Felicia: "It's as if he had Dentyne gum in a real nice peppermint."

Ryon: "We only have one minute to do this, so we gotta take this serious. We can't goof around, because Superman flies through rings all the time in the comics at Lex Luthor's behest."

Ryon: "People train their dogs to do this, you know."

Ryon: "This game is very— It's very user-friendly, but it's very choosy about who its friends are."

Felicia: "I don't know what happened there. I need to figure out how to drive first. It's counter-intuitive—"

Ryon: "NO! Wrong! Don't blame the game for your failings as a human being, okay?"

Ryon: "This is clearly one of the best games ever made."

Ryon sits in stunned silence with mouth agape after another failure

Ryon: "This game has a high barrier to entry, because they don't just want anybody to play."

Felicia: "Well, it's not made for newbs. Let's just be honest. Those fucking casuals dumbing down what, really, old-school gaming is about."

Ryon: "There sure are a lot of rings. It's like right when I get here my asshole clenches up so hard that I can make a diamond out of coal."

Ryon: "What was supposed to happen? Oh my goodness. How about that. Oh well, look at this! It's cool though! This is a good game! I don't wanna hear one bad thing about this. It's like this game is something that is to be savored and enjoyed, and I just don't deserve it."

Ryon: "Oh wow, look, I can do loops! Look at Superman. He can actually do tricks. I'm just gonna do loops, because that's what Superman is all about."

Felicia: "Did you enjoy the last movie? The last Superman movie?"

Ryon: "I wish it would have been as good as this game."

Felicia: "You can do four people!"

Ryon: "I know. Imagine having four friends in this and having the fun time of your life."

Ryon: "Are you going through my ring poop?"

Felicia: "I don't really understand why you have rings coming out of your butthole."

Felicia: "It's really hard to steer the camera, which is good because that's realistic. It's like gravity and stuff."

Felicia, as though speaking with a dental retainer: "Ermagard. Gersebermps."

Ryon: "crisis with infinite thumbs, and they're all pointed straight up"

Superman: The New Superman Adventures (more commonly called Superman 64) is a notoriously terrible game, landing a spot in virtually every worst-games list. DC Comics was apparently very heavy handed in controlling the IP, so they dictated odd requirements, such as it taking place in a virtual world because they didn't want Superman hurting real people, so the challenges feel artificial and with reduced stakes. The controls are unresponsive, and the graphics are poor, even for N64.

Rather than shoot fish in a barrel by badmouthing the game, it's fun that Ryon and Felicia chose to go the other way and be over-the-top effusive for what is clearly an unenjoyable and punishingly difficult experience. It turns a really bad game into a funny and memorable episode.