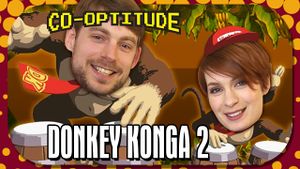 Felicia: "Hey, everybody! It's Co-Optitude! It's the show where I play games with my brother."

Felicia: "We're playing, per your suggestion, Donkey Konga. We're doing number 2 because we heard that the songs were better in 2. This is 2004."

Ryon: "Yeah. So we're gonna bop along to now irrelevant songs from the early 2000s."

Ryon: "Oh whoa, there are up to four players for this?"

Felicia: "You can have four peripherals!?"

Ryon: "Like, can you imagine the racket in the room?"

Felicia: "'Hey, bring over your bongos! Let's have a fun party!'"

Ryon: "All zero of your friends who own the controller."

Ryon: "Oh, are you supposed to hold it down? Do these people know how drums work?"

Felicia: "You're bending over for something."

Ryon: "It's your turn in the barrel, Diddy Kong."

Felicia: "Can you imagine a bunch of 12-year-olds, all four of them with their bongos on a Saturday night?"

Ryon, in exaggerated braces voice: "'You wanna come over. Let's do some bongos. We got bongos.'"

Felicia, in kid voice: "'Cindy really likes me. I'm gonna buy an extra set and invite her over!'"

Ryon: "Donkey Kong has the lamest iPod ever."

Felicia: "His Pandora station is so shitty."

Ryon: "It's like early 2000s frat rock. Like, Donkey Kong is straight out of the frat house with this."

Felicia: "Alright. Stop it! No, please don't! We're never gonna include that, please!"

Felicia: "This is the format your mom would make you do because it's fairer. There's no scoring involving. 'You guys, just play for the music's sake, not any scores. Don't compete!'"

Felicia: "You know one of these bands was a one-hit wonder and they're like, 'Oh my god, we got ourselves—'"

Felicia: "It's a Rock the Boat. It was like a Disney Channel special group that never made it past the demo record."

Felicia: "How many of these did they sell? I wanna read the statistics."

Ryon: "I think these are the two. Like, they're actually valuable, and we're gonna break them, and they're gonna be worthless."

Felicia: "My bra is like so hot right now."

Felicia: "So, you know who you are, one-hit wonders. We appreciate you."

Ryon: "That's right. If you were in one of the bands featured in today's episode of Co-Optitude, leave a comment!"