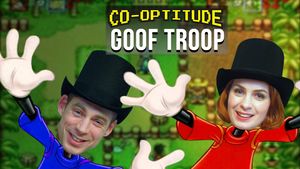 Ryon: "You look like the dancing animated frog from the WB."

Felicia: "Nobody knows that anymore."

Ryon: "Everybody knows that. Everybody does, and you're gonna get a lot of tweets."

Felicia: "Do you have fond memories of this episode?"

Ryon: "I think this is one of the better episodes we did."

Felicia: "What do you think was especially charming about it?"

Ryon: "Uh, I don't know, the fact that I hate Goofy and still do hate Goofy? So this is gonna be a return to those—"

Ryon: "Oh no. If not, I have more rancor towards Goofy than ever before."

Felicia: "You have not 'come to Goofy'—"

Ryon: "You have not learned anything in three years, have you? Have you?"

Ryon: "I learned that from watching Goofy."

Ryon: "Fucking motherfucker! Get out of the way, kid!"

Felicia: "Okay, you know what we haven't improved? Our language."

Felicia: "Okay. What time is it? [looks at clock hanging around neck] It's time to solve this puzzle."

Felicia: "Dawg, this is complicated, and I've had wine. This is like—"

Ryon: "Oh wow, you're now at the cognitive ability of a three-year-old. You don't have object permanence anymore. If you like close your eyes you think I'm not there anymore."

Ryon: "You're gonna be a woo girl here in a second, dude. Fucking 'How I Met Your Mother' shit going on. 'WOOOO! I SOLVED A PUZZLE! WOOOO!'"

Felicia: "Wait, where does this one go?"

Felicia: "This is impossible. I'm looking at it like a physicist and this is fucking—"

Ryon: "No you're— Yeah, you're doing some fucking Beautiful Mind [shit], aren't you? In your head? There's gonna be a cutaway to like computer numbers flashing around? Boop-boop-boop-boop-boop! Dumb fuck. Alright."

Ryon: "Hypothesis falsified 'cause I am right now."

Felicia: "We fucking need to solve this."

Ryon: "That's not a question! That's a statement."

Felicia: "You're the worst human alive."

Ryon: "Not a question also."

Felicia: "This one ultimately goes here, I guarantee you. Um, then we gotta go around the corner."

Ryon, laughing: "Good one, dude. That is so smart. That is so fucking smart. Holy shit, dude, I think you're onto something here. I think you might have it!"

Ryon: "I'm doing some number shit in my head, is what I'm doing. There's math flying around in my head right now."

Felicia: "Why are we drinking alcohol!? We couldn't do this sober! It's not like we're smarter three years later! We're just stupider! We're dumber people! Our brains are smaller! Our bodies are deader! We are never gonna solve this!"

Ryon: "Speak for yourself, dude. Now listen, my hypothesis is that we're smarter because two years ago we were two levels behind this. [taps forehead]"

Felicia, after a pause: "We used a cheat code."

Ryon: "Wow, you just did the easiest part of the puzzle that we already solved, and now it's my turn to have a revelation? You're intellectually dishonest, dude. You're the most intellectually bankrupt person I've ever known."

Felicia: "This one goes here. Do you see my English?"

Felicia, to off-screen person: "We're trying to figure out this quadrant!"

Off-screen person: "Just wait. It's really easy. Kick this over, and then up."

Felicia and Ryon together: "Ohhhhhhh."

Felicia: "Okay get out."

Felicia: "It wouldn't be a Co-Optitude episode if we actually beat a boss with skill."