Ryon plays Devil Dice. This episode is referred to as Mono-ptitude, since it only includes Ryon. 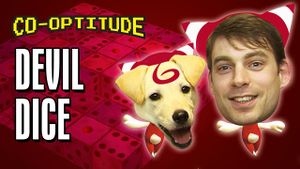 Ryon: "After some focus testing, we discovered that no one really likes the girl that was on this show. So we hope you like our new direction and you enjoy the lack of screaming."

Ryon: "Alright, so my sister's in Spain, eating tapas or getting gored by bulls or something like that."

Ryon: "This is about as exciting as watching flies fuck is the problem. Like, I could play this all day, but, you know, there's not much to sink my hooks into."

Ryon: "Little known fact. The Satan screaming sound is how they torture prisoners in Guantanamo Bay."

Ryon: "So apparently there's eleven-hundred puzzles in this game. [brightly] Let's get started!!"

Ryon: "See, eventually, I'll exhaust all the permutations of dice positions on the board, and on the very last one it will be the correct answer."

Ryon: "This is the game where if you don't have a date, you just kind of get a big block of cheddar and a box of Ritz and you sit down with this game and before you know it it's like 3AM and you're still on stage fifteen. I know what I'm doing tonight, guys."

Ryon: "This music sounds like the devil should be fucking some girl. His hips are moving in time to the music too. Look at it. He's gettin' it on. Oh, look at him. That's kinda gross. Alright, that's not gonna make it into the final cut. Or is it? Now I can't not see the hip thrusting."

Ryon: "I'm really fucking hungry, and Bucky the wonder dog shit in this room, so it smells like dog shit, so I'm gonna go ahead and go before I start puking."