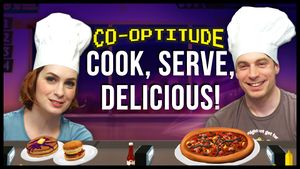 Ryon: "You wouldn't know it's Co-Optitude though because we're not on the Co-Optitude set!"

Felicia: "No, we're on the current Twitch set which doubles for Co-Optitude to be efficient."

Felicia: "You're resentful. You feel like you got downgraded."

Ryon: "How many cartwheels have I— I'm not your monkey, dude! I'm not gonna do a fucking cartwheel! I'm on STRIKE!"

Felicia: "Thank you for the dude who— I forget his name, but he gave me this on Steam."

Ryon: "I'm so glad your fans mean so much to you, especially when they give you free games."

Felicia: "It's DT! T— Tender Dave, or something like that."

Felicia: "We'll put a chyron up and say who the name is! Hey, thanks [mouths silently]. K? We'll just ADR that later."

Felicia, as they watch food tumbling on title screen: "I'm gonna work my way up to lobster no matter what. I don't know, onion? Just plain onion?"

Felicia: "I have. I've been to a Chinese restaurant. I don't think people eat the fish head. I think they—"

Ryon: "Dude. I beg to differ. The cheeks are the best part of the fish, dawg. I swear to you."

Ryon: "You're the shittiest, dude."

Felicia: "No, I'm not the shittiest. I like other—"

Felicia: "We have to start out like this. Now I would recommend fish, because—"

Felicia: "No, we don't need too many fatty things at the same time! We get negative buzz!"

Felicia: "Flush your own shit!"

Ryon: "Oh wait, Chester the Molester's waiting for his food."

Ryon: "Small diet with ice. Coming right up, sir! See how good that was?"

Felicia: "That was a woman."

Felicia: "You did not sanitize your hands! YOU DIDN'T SANITIZE YOUR HANDS!"

Ryon: "This dude came in at closing. What a dick."

Felicia, tenderizing chicken breast: "Four five six. Oh no. Did I do five or six?"

Felicia: "We still got a rush hour to go. We might have only had two failures. Just get up there. Get up there. There's failure everywhere in life. And that's all."

Felicia: "What are you doing!? You're disintegrating!"

Felicia: "You are disintegrating!"