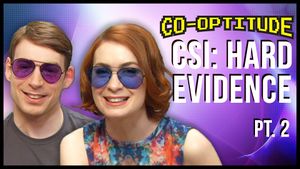 This is the second part of a two-part playthrough of CSI: Hard Evidence. The previous episode is the first part.

This is the first episode filmed on the Twitch set. The first part of this two-part playthrough was the last one filmed on the "Ikea" set. Ryon's intro to the episode indicates he was a little salty about this.

Ryon: "We got kicked off of our set."

Felicia: "No, we got invited—"

Ryon: "We don't have a set. We got kicked off of our set. Let's just call a spade a spade."

Ryon, recapping the previous episode: "Well, we went through training. We went through extensive thirty minutes of training, which is all you need to become a CSI investigator."

Felicia: "We found a fingerprint on a doughnut bag."

Ryon: "It was not a fingerprint. It was a dick print."

Ryon: "I think you should, upon apprehending a criminal, take penis prints."

Ryon: "There was a cabbie. He was doused in kerosene and set on fire."

Ryon: "We collected— NOT funny. We collected several pieces of hard evidence."

Felicia, laughing: "The way you said that, it was funny."

Felicia, nearly spit-taking: "Don't say that while I'm having fluids."

Ryon: "I'm gonna have to shine the UV light."

Felicia: "I don't want to talk philosophy with you, hobo."

Nick in game, moving a mattress off a putting hole: "Appears Ed didn't like having a hole in the middle of his suite."

Felicia: "Oh, he loves stuffing things in holes, as we saw at the fire temple."

They continued with the "ANUSS" name from last episode.