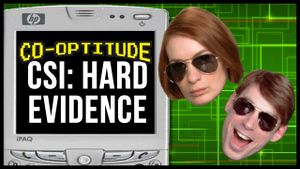 This was the first of a two-part play-through. They conclude the game in the next episode.

This was the last episode recorded on the Co-Optitude set.

Felicia, reading back of game: "'A drop of blood. A missing screw. A mysterious powder.'—"

Ryon: "I've had the case of the missing screw in my life before."

Ryon, interrogating lunch thief: "Alright, did you or did you not take my lunch from the fridge? Was it clearly marked 'do not touch'?"

Ryon: "We used like $500 worth of lab equipment to find out who stole the doughnuts."

Ryon: "Next thing we're gonna be running a DNA test on dog shit to see who didn't pick up after their mutt. This entire game is like inconsequential crimes. It's like CSI: Junior."

Ryon, watching Felicia struggle to enter her name: "What are you doing, dude?"

Felicia: "I am trying to get"

Felicia: "There's something wrong with this controller."

Felicia, as they attempt to find a DNA match: "Ohhhh!"

Ryon: "Fuck this guy. We're gonna nail this guy to the wall. [Game rejects the match] What!?"

Nick in game: "Little details make all the difference."