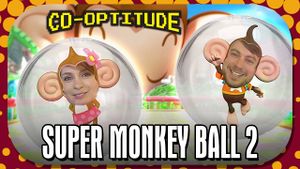 Felicia: "Co-Optitude is a show where I play retro games— or games— Let's just get rid of the retro thing. Because people are getting defensive because it makes them feel old to have your childhood game be retro."

Ryon: "Yet neither are they new. So we got— Where we play tweener games for your entertainment!"

Ryon: "Tweener. It's the awkward donkey years. These are games that have all gangly limbs and budding breasts, and they're just starting to sprout hair in curious places."

Felicia: "Let's not talk about this! This is not—"

Ryon: "It happens to every game."

Ryon: "This is a little monkey with Pac Man eyes and cinnamon roll ears who has big dreams of piloting a ball around the course."

Felicia: "Why does he have cinnamon roll ears? That so— I'm never going to be able to—"

Ryon: "I don't know. If you think you know why the monkey has cinnamon roll ears, leave a comment!"

Ryon, of banana: "Oh, it's a Dole! I have a hankering for a Dole banana! I wonder why. Just, no other banana will do."

Ryon: "That's part of the fun of discovery, so—"

Felicia: "It's not fun for anyone."

Ryon: "You're gonna run out of time, and it's gonna be so funny when you almost get to— [Felicia falls off edge] Bye!"

Ryon: "How could you be going like 3 miles an hour and still wreck?"

Felicia: "'Cause I needed that Dole banana!"

Ryon: "When I feel a need for some energy, I look to Dole bananas!"

Felicia: "You know, if they go fast enough they can bore to the center of the earth."

Ryon: "You were really gleaming the cube there!"

Ryon: "You're going 70 miles an hour. And you're just kinda rattling around in your ball too."

Felicia: "There's probably puke in there. Just like banana shit and it's all tossed around in there."

Ryon: "Boy, that baby's mom is gonna have to explain the bruises. 'Oh, he just fell down some stairs. He's so clumsy, that baby.'"

Ryon: "Dole is not going to renew this monkey's promotional contract."

Ryon: "If the objective of this game was to miss platforms and fall off platforms, we would be the world's best players."

Ryon: "At this point, you're just guilty of repeated child abuse. We're gonna call CPS and take your monkey away."

Felicia: "Once you're in the hole you can't do anything else!"

Felicia: "I just like supporting a woman. 'Cause you know that a woman owns that banana company."

Felicia: "It's Carmen Miranda! Remember that woman? She owns that banana company."

Ryon: "I think Donkey Kong would eat these fuckers for lunch."

Felicia: "I think he'd date me. Like this character."

Ryon: "Um, he would hit it and quit it. If Donkey Kong were on a TV show, it would be Jersey Shore. Did you know that?"

Felicia: "Do they live in their bubble or they get out of their bubble and then have to go in and compete? You know what I'm saying?"

Ryon: "I think that if they do really well, their master lets them out of their bubble briefly, only to put them back in the next morning."

Felicia, as Ryon does Coaster level: "If you get this on the first try I'm gonna kill you."

Felicia: "It was an accident you made it last time."

Ryon: "Shut the fuck up. Boy, if I get it this time, [the monkey reaches finish line] that'd be amazing, wouldn't it? Wouldn't that be incredible if I got it the very first time?"

Ryon: "I got two banana bunches, too!"

Felicia: "That's what I'm saying. If you put a small child— If this was Baby in a Ball, people would not be happy."

Ryon, laughing: "Like you're throwing babies off cliffs and such?"

Felicia: "Think about that Ally McBeal baby inside a ball—"

Felicia, about game mode: "It looks like we might be out of the ball, which I think is—"

Ryon: "'Let's think out of the ball.' That's what these monkeys say when they're trying to think up an idea."

Felicia: "You're much more of a Gongon than an Aiai. If you did a horoscope, like, 'Which monkey ball are you?'"

There wasn't an option to name your characters, but the high score screen let you enter your name.

Other names seen on the leaderboard which may be Ryon's character: